On December 4, the International Forum on Peaceful Use of Nuclear Energy, Nuclear Non-Proliferation and Nuclear Security, sponsored by the Japan Atomic Energy Agency (JAEA), was held in Tokyo. Through two panel discussions with domestic and overseas experts, specialists and governmental personnel, participants discussed future challenges and countermeasures in the areas of nonproliferation and security. 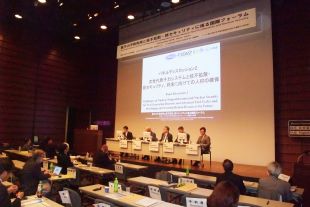 According to the Japan Atomic Energy Commission’s report of September 2011, nuclear security is defined as “prevention, detection and response to any criminal or other intentional act against nuclear or other radioactive materials, or their related facilities or activities, including their transport.” Since the 9-11 terrorist attacks in the United States in 2001, people have been increasingly concerned about nuclear terrorism and ways to prevent it, such as the foregoing of large-scale events in Japan.

In the first panel discussion, Associate Assistant Deputy Administrator Eleanor Melamed of the Office of Global Material Security, National Nuclear Security Administration (NNSA), U.S. Department of Energy (DOE), talked about illegal transactions, thefts and the like during the transporting of radioactive materials. She also mentioned problems posed as a result of recent digitalization, including threats to cybersecurity and those from insiders.

In a video message, Executive Director Roger Howsley of the World Institute for Nuclear Security, who has held workshops on nuclear security in several countries, emphasized the importance of “effective resource distribution” and “cooperation beyond national borders.”

In response, Kenichi Tsuchiya, a senior scientist at the National Research Institute for Police Science, said, “An individual can learn how to make explosives by watching videos on the internet. Threats have changed with the times and it is necessary to continuously evaluate responses.” He then gave two examples of “nuclear terrorism” possibly directed at large-scale events: dirty bombs, by which explosives diffuse radioactive materials, and silent source attacks, wherein fatal levels of radioactive materials are introduced in areas where people gather. 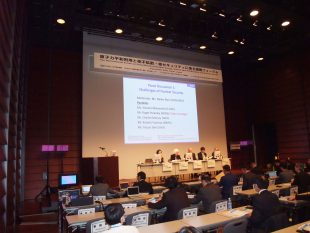 Referring to his experience implementing initial response drills, he added that his institute had developed a virtual radiation measurement system called USOTOPE, using a smartphone application, in response to a request from local police for a dummy for use in training for nuclear security measures.

Deputy Director Tatsuo Torii of JAEA’s Sector for Fukushima Research and Development, who is engaged in remote-control technology research and is also experienced in monitoring very wide areas in the wake of the accident at the Fukushima Daiichi Nuclear Power Station (NPS), noted the effectiveness of drone technology and three-dimensional visualizations in the nuclear security field. He referred to the importance of lessons learned from the accident and cooperation with private companies.

Charles Massey, nuclear security officer at the IAEA’s Nuclear Safety and Security Bureau, concluded the first panel session by saying, “Where nuclear safety measures and nuclear security measures meet, it is necessary for each to cooperate with the other to improve their total effectiveness.”

The second panel discussion, then, was moderated by Takashi Kiyoura, director of the Research and Development Bureau’s Atomic Energy Division under Japan’s Ministry of Education, Culture, Sports, Science and Technology (MEXT).

Presentations at the second panel discussion were given by the following persons:

IAEA’s Boyer and JAEA’s Kawasaki both talked about activities using an international cooperation framework: INPRO and the Generation IV International Forum (GIF), respectively. Citing the institutional and technological issues associated with the development of next-generation reactor systems, they discussed the need to secure the necessary human resources involved in future nuclear nonproliferation and nuclear security efforts.

Finally, Texas A&M’s Mendoza talked about the need for governmental offices and research institutes to attempt to get students interested in nuclear subjects at an early stage, such as offering them scholarships and fellowships.