The Japan Atomic Industrial Forum (JAIF) held its annual New Year's Party on January 9 in Tokyo. Some 900 people from JAIF member companies and the Japanese government, as well as representatives of foreign embassies in Japan and elsewhere, gathered to mark the start of the new year and renew personal and professional friendships. 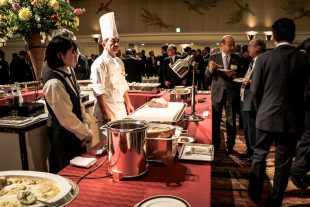 In his opening greeting, JAIF Chairman Takashi Imai referred to last year’s efforts to restart nuclear power plants (NPPs) in the country. Mentioning the issuance in December of a temporary injunction by the Hiroshima District Court against the operation of the Ikata-3 (PWR, 890MWe), owned and operated by the Shikoku Electric Power Co., he expressed concern that the judgment of Japan’s Nuclear Regulation Authority (NRA) had been reversed, but also stressed his expectation that a revised ruling would be made at the second hearing. 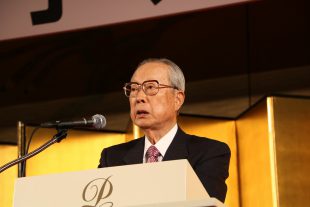 Imai then noted that Kashiwazaki Kariwa-6 and -7 (both ABWRs, 1356MWe) of the Tokyo Electric Power Co. (TEPCO) had both cleared the NRA’s examinations last month, confirming their compatibility with new regulatory standards—the first boiling water reactors (BWRs) to do so. With the precedent of both pressurized water reactors (PWRs) and BWRs having met the standards, he predicted greater momentum toward restarting other NPPs.

Turning to Japan’s composition of power sources (the so-called “energy mix”), in which nuclear power’s share is set at 20 to 22 percent of total generated electricity by fiscal 2030 (April 2030 to March 2031), he said it would be necessary to restart 30 reactors to achieve that goal. That is, with no immediate prospect for constructing new units, Japan has no other course but to restart its existing NPPs and promote their lifetime extension to the maximum extent. 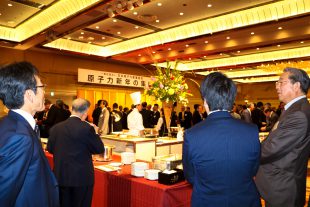 Toward the year 2050, in association with long-term global warming issues, the JAIF chairman referred to revisions to the nation’s energy policy now being considered by the Agency for Natural Resources & Energy (ANRE) under the Ministry of Economy, Trade and Industry (METI). He said that Japan’s long-term target of an eighty-percent reduction in CO2 emissions by 2050 would not be achieved unless new NPPs were constructed, stressing the need to maintain nuclear power. 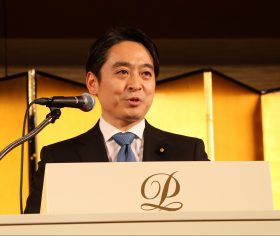 He then said that the industry would have to make concerted efforts to promote activities nationwide to impress upon the public the necessity of nuclear power. He urged those present at the New Year’s Party to reinforce their cooperation and promote those activities forthwith, unifying the entire industry from the viewpoint of energy security, considering recent global circumstances.

METI Parliamentary Secretary Daisaku Hiraki, also present at the party, then spoke, saying that it would be soon be seven years since the massive earthquake of March 11, 2011. He n noted that the reconstruction of Fukushima Prefecture, along with decommissioning and contaminated water measures, were issues of the highest priority for his ministry, emphasizing that the government would continue working on them steadily. 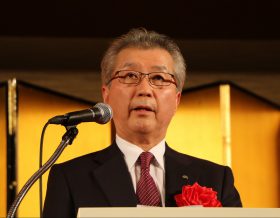 The next person to speak before the participants was Satoru Katsuno, chairman of the Federation of Electric Power Companies (FEPC), who also mentioned domestic efforts to restart NPPs. He referred to their growing record of stable operation, adding that his organization would fully respond to the NRA examinations underway, aiming at their early restart. Katsuno concluded by saying that the FEPC would work on steadily promoting the nuclear fuel cycle and the selection of candidate sites for high-level radioactive waste (HLW) disposal, among other issues.