On April 13 and 14, the JAIF Annual Conference was held in Tokyo for a two-day period. Under the keynote theme “Why Nuclear?”, over 900 participants from 31 countries and regions, along with four international organizations, discussed the roles of nuclear energy both domestically and internationally, as well as issues to be handled toward the reconstruction of Fukushima. 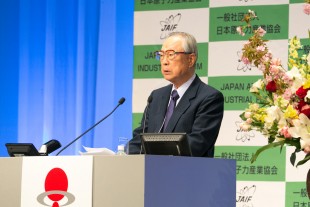 In the kick-off session, JAIF Chairman Takashi Imai delivered the opening address. Expressing his concerns about the outflow of national wealth as a result of Japan’s having shut down all of its nuclear power plants (NPPs) for several years, and the effects of increasing CO2 emissions on the Japanese economy, he emphasized the need to decrease the country’s dependence on thermal-powered power generation by swiftly restarting those NPPs whose safety is confirmed. He also referred to the fact that 80% of the oil imported by Japan passes through the politically unstable area of the Strait of Hormuz. In his address, Imai also said that depending on fossil fuels was accompanied by great risk and vulnerability.

Imai then spoke about Japan’s future energy supply-and-demand outlook, which the government is now drawing up, as well as discussions on CO2 reduction targets toward COP21 at the end of 2015 — noting in the process the importance of energy conservation and the introduction of renewables. He pointed out the need to discuss the matters from a broad, objective viewpoint, taking into account the dangers of reducing dependence on nuclear power.

Next to talk at the JAIF Annual Conference was Taishiro Yamagiwa, state minister of Japan’s Ministry of Economy, Trade and Industry (METI), who talked about decommissioning and contaminated water issues at the Fukushima Daiichi. He said that steady progress has been seen, including the removal of spent fuel from the Unit 4 spent fuel pool in 2014, as well as additional installations of multi-nuclide removal equipment, known as Advanced Liquid Processing Systems (ALPS). He noted also, however, that those remained the greatest “immediate issues” for the many people affected by the accident and who are still forced to live in inconvenient circumstances, adding that the government was determined to do its utmost to help them.

As for Japan’s electricity system reform, Yamagiwa said the national government would adopt policies and take necessary actions to let nuclear power play its “proper role.” He then talked about ongoing discussions on establishing a national energy mix, saying that the government would realize a well-balanced energy supply-and-demand structure focused on the so-called “3E+S” (energy security, economic efficiency and environmental protection, plus safety).

Moving on, Director General Yukiya Amano of the International Atomic Energy Agency (IAEA), in a special presentation, talked about developments in nuclear power worldwide. He said that although the pace of development had been slower than past predictions, it was expected to “proceed for several decades.” Referring to the Asian boom in building new NPPs, thanks to the region’s remarkable economic growth, and to the fact that other developing countries are trying to introduce nuclear energy as well, he emphasized its role as a reliable base-load power source at a time of increasing energy demand in many countries. He added, “Safety is the key for the future of nuclear energy.”

Amano struck a note of warning when he said that the Fukushima Daiichi accident in Japan “showed that nuclear accidents can happen in technologically advanced countries.” He said that, with nearly 200 experts involved, IAEA is currently working on a report on the accident to contribute to strengthening nuclear safety around the world. He then cited diagnostic tools for Ebola hemorrhagic fever as an example of nuclear science and technology’s contributions to improving people’s lives, especially in developing countries, and emphasized that “nuclear energy for peace and development” was a mission of the IAEA.

Next to speak was Director General William Magwood of the OECD Nuclear Energy Agency (OECD/NEA). He talked about an NEA report on the Fukushima Daiichi accident and OECD’s and NEA’s nuclear safety response, and the lessons learned. He noted that the accident at Fukushima Daiichi was not only an engineering problem, but involved human aspects, including the lack of preparedness for severe accidents and a problematic organizational mindset, both of which cannot be ignored.

As for Fukushima Daiichi’s decommissioning, Magwood expressed concern that various issues could be expected to arise over the coming decades. He urged that practical measures be developed, such as the current situation with an ever-increasing number of tanks used to store treated water. Referring to a meeting he had in Paris with visiting high-school students from Fukushima, he said that he felt their “strong determination to recover” from the current difficulties, adding that they expected the affected areas to be reconstructed swiftly.

Other speakers at the conference were Admiral (Ret.) Dennis Blair, chairman of the Sasakawa Peace Foundation U.S.A., who talked about the future of Japan and the United States in the international nuclear market, and Kenji Yamaji, director general of the Research Institute for Innovative Technology for the Earth (RITE), who made a presentation on reduction targets for greenhouse gas emissions, which the Japanese government council is currently working on.