On September 22 and 26, the Japan Atomic Industrial Forum (JAIF) presented lectures to roughly 20 third-year students at Tokyo City University under the theme of "Thinking Together about the Disposal of High-Level Radioactive Waste (HLW)." The students are all majoring in nuclear fuel engineering in the school's Department of Nuclear Safety Engineering. 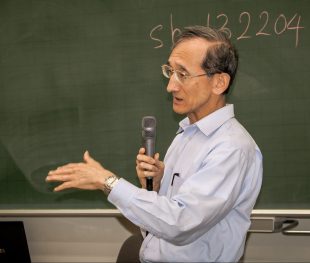 JAIF, in its demae (“delivery”) lecture program, dispatches lecturers to various educational institutions to explain such subjects as energy businesses in Japan, environmental preservation, and geological disposal, to prompt students to think further about what they want the future of nuclear energy to be.

In the second half of this fiscal year (October 2017 to March 2018), JAIF will present similar lectures in this—the twelfth year of the program—to young people at other universities and national institutes of technology around the country.

On September 22, JAIF’s Seietsu Takeda talked to the students about energy and environmental issues. Against the backdrop of increasing global energy consumption, it is necessary, he said, to look at power supply sources in terms of the “S+3 E’s,” namely, safety, energy security, environmental conservation and economic efficiency.

He continued to tell them that the Japanese government has presented its position that, in the nation’s composition of power sources (the so-called “energy mix”), the nuclear share of generated electricity should be around twenty to twenty-two percent by 2030, even as it promotes the technological development of new energies as well. 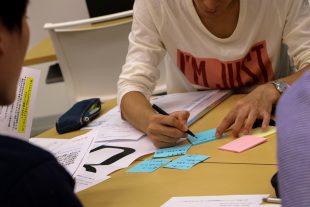 Regarding the disposal of high-level radioactive waste (HLW) from nuclear power, he said that the internationally favored method of geological disposal is considered the most feasible, as safety will be ensured without future human effort even if the waste itself is forgotten.

Our generation, Takeda told the students, has enjoyed the benefits of nuclear power, so we must pave the way for the disposal of our own waste. He said that Japan has not yet reached the point in which surveys of candidate disposal sites can be carried out.

When asked about the feasibility of next-generation energies, Takeda answered that no energy is perfect or the “most suitable” in all aspects, and that the best approach would be to continue various developments simultaneously and seek a best, or optimal, energy mix.

On September 26, the second day of the program, the students were divided into three groups to discuss concepts of HLW disposal and safety, based on what they had learned and thought after the previous lectures. 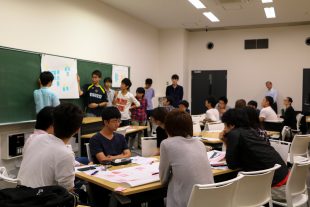 They also were invited to ask the lecturer about topics that interested them. For example, when asked whether solidification could be carried out using materials other than glass, the lecturer told the students about R&D being carried out in Australia on a substance called Synroc, short for Syntheticrock. As the material is still being tested, he said, it is not yet commercially available.

One student mentioned that he wanted to know more about how public consensus was formed in other countries. The cases of Finland and Sweden were then discussed. In both countries, disposal sites are currently being selected, with the key to progress being that the governments are trusted by the people.

The students then organized the thoughts of their respective groups on how resolve HLW disposal issues, writing them in similar formats, and delivering group presentations at the end.

Students from one group said, “Before proceeding to the stage of dialogues with residents, sufficient explanations need to be made so that the people will be able to understand geological disposal.” Another said, “New technologies should be developed while attempts are made toward geological disposal so as to reduce the volume of HLW.” A third group said, “We hope that the people grateful to have enjoyed the benefits of nuclear power will volunteer their cities as disposal-site candidates.” 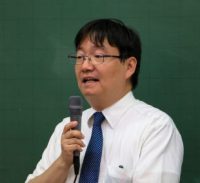 Finally, one student posed this question: “Why can’t we find disposal sites in a cooperative fashion with those countries that have a lot of empty land?” In response, Associate Professor Haruaki Matsuura of Tokyo City University said, “At present—not knowing what the situation will be in a few hundred years—it is generally agreed internationally that each country must dispose of its own HLW. If disposal were to be made externally, it would require quite a lot more discussion.”

He added that efforts to reduce HLW volumes must be made, and that the university would offer classes on the nuclear fuel cycle in the future.