On June 18, the Japan Atomic Industrial Forum (JAIF) held its general assembly for FY18 (covering the period from April 2018 to March 2019) in Tokyo, at which a settlement of accounts for the previous fiscal year was submitted and appointments of officers upon the expiration of their previous terms were proposed; both were unanimously approved. The assembly participants were also given explanations of the FY17 business report and the FY18 business plan and budget. 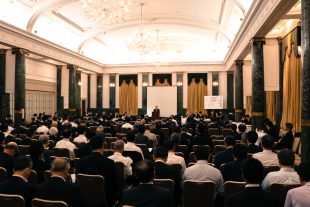 At a meeting of the board of directors following the general assembly, JAIF Chairman Takashi Imai and JAIF President Akio Takahashi were both reappointed to their positions. Meanwhile, the board newly elected Chairman and CEO Nobuaki Kurumatani of Toshiba Corporation as JAIF vice chairman, with Director Akihito Uetake of the Kansai Electric Power Co. (also branch manager of its Himeji Branch) elected as senior managing director.

At his opening address to the general assembly, Chairman Imai referred to the draft of the recently-finalized 5th national Strategic Energy Plan, saying that nuclear power was essential from the viewpoint of the so-called “3E’s” of energy security, economy and environmental protection. 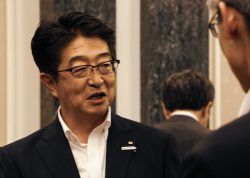 He nevertheless emphasized that nothing was more important than regaining public confidence, given the severe situation facing nuclear power now. The domestic nuclear industry, he said, would continue its efforts to improve nuclear safety, and aim to enable interactive communication to win public understanding about the valuable role played by nuclear energy in society.

The JAIF chairman then said that he looked forward to the establishment of the Atomic Energy Association (ATENA) on July 1 with the participation of nuclear operators, manufacturers and related organizations. ATENA, he said, would facilitate the achievement of substantive safety improvements, the integration of the newest information and knowledge available both domestically and overseas, and engagement in dialogue with the national regulatory authority.

Imai also referred to the Japan Nuclear Human Resource Development Network (JN-HRD Net), which consists of 75 organizations from the public, academic and industrial sectors. He said that he was enthusiastic about JAIF’s leading role as a “control tower” enabling JN-HRD Net to work strategically on human-resource issues, in addition to its conventional functions of information sharing and the promotion of cooperation. 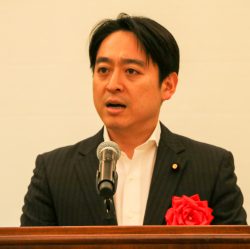 Invited to the assembly was Parliamentary Vice-Minister Daisaku Hiraki of the Ministry of Economy, Trade and Industry (METI), who said that hopes remained high for nuclear energy for Japan, where the establishment of an energy strategy was necessary to achieve long-term decarbonization targets. Hiraki highlighted the importance of working on human resource development now to meet the needs and expectations of the future. He stressed that the public and private sectors must collaborate closely to realize the national Strategic Energy Plan.

Next to speak at the assembly was Director General Koji Saeki of the Research and Development Bureau of the Ministry of Education, Culture, Sports, Science and Technology (MEXT), who read a message on behalf of MEXT Minister Yoshimasa Hayashi. He said that it was important to give individuals the opportunity to use and operate nuclear facilities for nuclear human resources to be developed properly.