On March 3, "Presentations by the Atomic Industry 2020" (PAI), jointly sponsored by the Japan Atomic Industrial Forum (JAIF) and Kan Gen Kon (Kansai Genshiryoku Kondankai), was held in Akihabara, Tokyo. Some 213 students, mainly those expecting to graduate in 2020, took part. Three days later, a similar event was staged in Osaka. 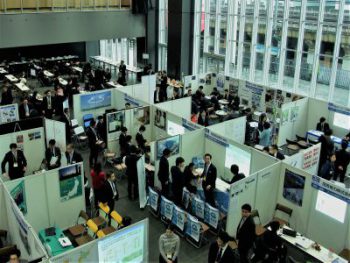 There were forty-six companies and organizations participating in the event at Tokyo, with a further thirty-four at Osaka. The total of eighty booths in both venues is the largest so far. At each booth at the sites, recruiting personnel and young employees welcomed visitors, made presentations, explained business activities, and answered questions.

At the Tokyo venue, representatives of the Tokyo Electric Power Co. (TEPCO) described it as “a company providing electric power enabling users to lead comfortable lives.” Focusing on its Kashiwazaki Kariwa Nuclear Power Plants—the operation of which is currently suspended—the company explained its safety measures and training using simulators to maintain operational technology.

Regarding the issue of decommissioning at the Fukushima Daiichi NPPs, TEPCO representatives said that the site was drawing “closer to becoming a normal place of work,” and told the students how it was becoming somewhere in which people from diverse backgrounds could “work together enthusiastically.”

At the same booth, a woman who has worked at TEPCO for seven years in the fuel department explained her responsibilities in regard to IAEA safeguards. She said that she would soon be assigned to a power-generation project overseas based on the specialized knowledge she has accumulated. She emphasized that her work was very fulfilling.

Meanwhile, representatives from the Nuclear Waste Management Organization of Japan (NUMO), which has participated in each PAI event since the first one in 2006, explained the need for high-level radioactive waste (HLW) disposal, the reliability of geological disposal technology, and activities to improve the understanding of the public based on that reliability. Students frequently asked them why no municipalities had yet volunteered to become an HLW disposal site.

Additionally, the Nuclear Regulation Authority of Japan (NRA) and its secretariat held a total of nine presentation sessions during the day, between 10:00 a.m. and 4:30 p.m., explaining their regulatory activities as well as their own educational and training system, and addressing work-life balance issues.

This year, for the first time, an international organization also took part in PAI: the domestic arm of the ITER International Fusion Energy Organization. The ITER (International Thermonuclear Energy Reactor) project involves a total of thirty-five countries, including the seven ITER member countries (of which Japan is one), which are collaborating to construct an experimental fusion reactor in France that is expected to start operation in late 2020.

Also, a representative of Japan’s National Institutes for Quantum and Radiological Science and Technology (QST), which serves as a contact point for ITER, talked about the necessity of ensuring human resources for long-term R&D, saying, “Today’s students will be actively involved in the future construction of the prototype reactor.”