JAIF Holds Women’s Symposium, with Presentations by Weathercaster and Professor

On October 10, the Japan Atomic Industrial Forum, Inc. (JAIF) held a symposium at the Industry Club of Japan in Tokyo for women belonging to its member organizations.

The symposium began with presentations by Yusuke Tezuka, a weather forecaster at Weather Map, and Noriko Endo, project professor at the Graduate School of Media and Governance in Keio University. Following those, the participants proceeded with table talks in small groups, among other activities.

Tezuka’s presentation was entitled, “Concerned About the Future of the Earth! Global Warming from a Weathercaster’s Perspective.” He started by telling the symposium participants, “In Tokyo, the average temperature rose 2.5 degrees (C) over the past century. By the end of the 21st century, that will be three to four degrees higher.” He pointed to the heat island phenomenon as another major factor in the distinctive rise in temperature in urban areas, in addition to global warming.

The guerrilla rainstorms that have been occurring frequently in recent years are caused by global warming, he added. Tezuka went on to illustrate the magnitude of the problem of flooding in urban areas, including underground shopping complexes being submerged.

He also sounded a strong warning over the multiple adverse effects of global warming, referring to (1) increased risks of heat attacks (heat exhaustion and heat stroke) and infectious diseases, (2) stronger typhoons due to higher seawater temperatures, and (3) the probability of disappearing beaches and shorelines stemming from rising sea levels, resulting in the destruction of ecosystems.

Tezuka noted the fact that northern limits for crops are themselves moving northward, citing citrus fruits tolerant to heat now growing in Kagoshima Prefecture, at the southern tip of Kyushu, as an example of improvements to plant varieties. He also mentioned the requirements of capital investment.

The weathercaster concluded his presentation at the symposium by saying, “Changing what they are, without waste, is a challenge. But Japanese firms are more than capable of creating new technologies.”

Next to speak was Keio University Professor Endo, whose presentation was entitled, “Energy Policy in a Heavy Power-consuming Age.” She started by explaining the first, second, and third industrial revolutions, which were driven by steam, electricity and computers, respectively, then went on to describe the current fourth industrial revolution, the defining feature of which is innovation through AI and robots.

Professor Endo told the audience, “No energy is a panacea. Gather all the information available and make the best choice.”

Endo pointed out that despite the advancing creation of new businesses and diverse services, the spread of the internet worldwide and rapid increases in data volumes has expanded power consumption. For example, the standby power consumption by networks of home appliances (including air conditioners) that can be operated by mobile terminals is expected to grow six times by 2025. The use of electric vehicles will also accelerate, she said, led by China.

Turning to Japan’s energy policy in view of power consumption in the fourth industrial revolution, Endo cited data related to such trends as the country’s oil dependency on the Middle East, the decommissioning of the country’s nuclear power plants (NPPs), the outlook for installed capacity, changes in greenhouse gas emissions, and generation costs by power source.

She stressed the need to be aware of the reality of tradeoffs: namely, that when making a choice, something else is always sacrificed.

After the presentations, participants took part in table talks, asking the two presenters questions on various issues. Coincidentally, a large typhoon was approaching Japan at the time. 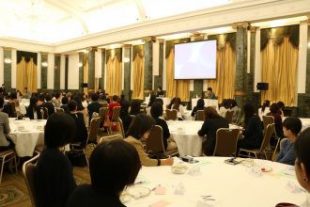 About one hundred women from member organizations gathered at the JAIF symposium to listen to and speak with the featured presenters.

Asked whether the accuracy in forecasting typhoon tracks would improve in the future, Tezuka said, “It might, thanks to better computing and refinements to observation points.” He qualified that statement, though, by saying that he was worried that past data would no longer be helpful in light of the freakish weather that has intensified recently.

Meanwhile, Professor Endo, when asked about the outlook for the composition of power sources, summarized the current situation in terms of the frequent occurrence of major disasters, the convenience of coal and oil, related trends in money markets, and the public acceptance of nuclear energy. She concluded, “The only way to maintain technology is to use all the energy sources available for the the time being.