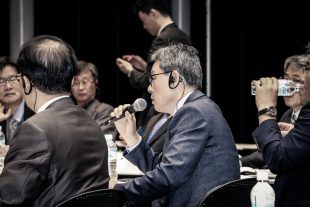 Starting this time, the two organizations agreed to more narrowly focus the seminar’s themes on issues common to both countries, enabling the participants to have deeper discussions and share information more meaningfully. Under the key theme of decommissioning, presentations were made along with active exchanges of opinions and views.

The Japanese participants in the seminar explained decommissioning at the Fukushima Daiichi Nuclear Power Plants (NPPs), including the development of technology to remove debris. Photographs were shown illustrating the use of muon observation technology to detect locations of debris, with videos used to show reactor interiors using remotely-controlled robotic cameras.

In addition, the Japanese also described the current state of reconstruction of Fukushima, where the steady lifting of evacuation orders continues, and where communities are coming back to life. They also introduced volunteer activities by the Tokyo Electric Power Co. (TEPCO), such as helping victims clean and restore their houses.

They also gave several examples from ordinary decommissioning as reference cases: namely, the plan to decontaminate all systems toward decommissioning the Mihama-1 and -2 (PWRs), and shroud replacement at the Fukushima Daiichi-3 (BWR) two decades ago.

Meanwhile, the South Korean participants in the joint seminar gave presentations on the process of choosing stainless steel cutting technology to dismantle reactor core internals at the Kori-1 (PWR, 587MWe), which was permanently closed in June. They also described such developments as the transport of radioactive waste stemming from the decommissioning of the research reactor KRR belonging to the Korea Atomic Energy Research Institute (KAERI). Additionally, they presented an overview of the Wolsong Low and Intermediate Level Radioactive Waste Disposal Center (WLDC), along with its operating plan. 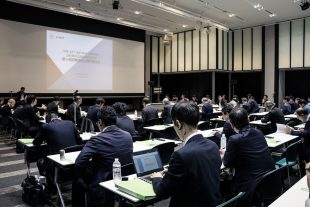 In the topical session, in which JAIF President Akio Takahashi served as the moderator, presentations were given by both sides on earthquake measures at NPPs. Masaru Furuya, from TEPCO’s Nuclear Asset Management Department explained improvements to seismic design at the Kashiwazaki Kariwa NPPs. He emphasized the importance of “diversity” in seismic design—adapting both dynamic and static design—and of taking precise measures for facilities evaluated as having low seismic importance, taking ripple effects into consideration.

At the same session, Director Jae Gil Choi of South Korea’s Hanbit-3 (PWR, 1000MWe), owned by Korea Hydro and Nuclear Power (KHNP), talked about seismic measures in the wake of the earthquake in Gyeongju in 2016, including strengthening shutdown systems and seismic monitoring, and a plan to establish a comprehensive disaster response center.

After the discussions, KAIF Executive Vice Chairman Jae Yuel Kang referred to a video in which Director General Yukiya Amano of the International Atomic Energy Agency (IAEA) said that “safety is always the top priority with nuclear technology,” and proposed that Japan and Korea further discuss issues in nuclear safety.

JAIF President Takahashi, in his conclusion, said that decommissioning and dismantling were timely subjects for both countries, which are entering an “age of decommissioning,” and that they had enjoyed significant information exchanges this time.