At a regular press briefing held on July 27, President Akio Takahashi of the Japan Atomic Industrial Forum (JAIF), speaking about his organization's recent activities, gave detailed comments on the 2nd Meeting of Japan-Taiwan Nuclear Energy Experts, held on July 18. JAIF has staged the expert meetings thirty times since 1986, including when it used to be known as the Japan-Taiwan Nuclear Safety Seminar. 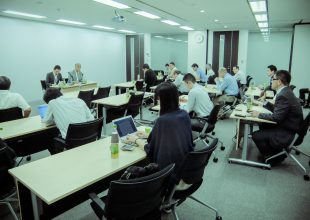 With Taiwan having decided to eliminate nuclear power by 2025, and with sixteen nuclear reactors in Japan already slated for decommissioning—including the advanced thermal reactor (ATR) Fugen—participants from both countries were keenly interested in this year’s theme, which was decommissioning. The meeting provided a significant opportunity to exchange views and information.

In the Q&A segment of the briefing, the JAIF president stated his recognition that the “Map of Scientific Features” toward realizing geological disposal of high-level radioactive waste (HLW), which was expected to be released before the end of July, would be the “first step on a long road.”

Takahashi said that disposal was an important challenge facing the current generation, and that the Japanese government would explain the issues to the public to help deepen their understanding. He said that he expected that the government and the public would each air and confront their differences sufficiently and proceed to the next stage, even if it took some time.

This month, work will begin to revise Japan’s Strategic Energy Plan. As energy policy cannot be changed in a short period, and given that especially nuclear power projects take many years from initial planning to the actual start of power generation, Takahashi said that he expected discussions about the plan to look beyond the 2030 supply and demand outlook, which pegs nuclear power’s share of the energy mix at around twenty to twenty-two percent.

He also said that it would eventually be necessary to construct new and replacement nuclear power plants (NPPs)—something that is not addressed in the current Strategic Energy Plan. In addition to the promise of “3E+S” (the traditional three E’s of energy security, economy and environmental protection, plus safety), he said that nuclear capital investment carries great weight as is “a way to invest in the public,” including construction and maintenance jobs. He further emphasized the need to clearly communicate its value to the public.

Finally, concerning the issue of helping the public to better understand nuclear issues, President Takahashi explained how JAIF is supporting seminars, training, and the like for junior high school teachers in charge of radiation-related subjects.