On December 20, President Akio Takahashi of the Japan Atomic Industrial Forum (JAIF) gave his final press briefing of the year. Looking back on the current year, he pointed out to progress in safety examinations by Japan’s Nuclear Regulation Authority (NRA). Four domestic nuclear power plants cleared the new regulatory standards and resumed operation, he said, while the Tokai-2 (BWR, 1100MWe), owned and operated by the Japan Atomic Power Company (JAPC), obtained permission for a lifetime extension, the first ever for a BWR in Japan. 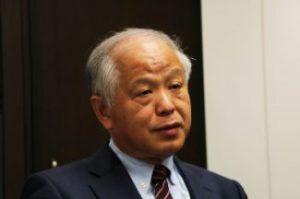 The JAIF president then pointed to more recent developments, both in Japan and abroad. The Nuclear Waste Management Organization of Japan (NUMO) released a comprehensive technical report, with the government—coincidentally on the same day—finalizing its strategic road map specifying a development plan for fast reactors. In developments overseas, President Takahashi mentioned that the Wylfa Newydd project in England and the Sinop project in Turkey were both experiencing difficulties.

Asked about news reports concerning the Wylfa Newydd project, he agreed that “cost is a factor,” but added that “expectations for Japan’s technology are solid.”

Further asked about the significance of Japan’s exporting NPPs, the president said, “First, technology is Japan’s contribution to the world, including safety measures developed after the [March 2011] accident at the Fukushima Daiichi NPPs.” He continued, “It also contributes to sustaining and improving the levels of accumulated technology and maintaining supply chains. In addition, the existence of overseas projects is very important to make young people find nuclear power attractive.”

As for the significance of fast reactor development, the JAIF president explained that while a uranium shortage is not imminent, none of the substance is currently being produced in Japan. “fast reactors may not be urgently needed,” he said, “but we have to continue to develop the technology.”

In a Q&A session following the briefing, reporters queried President Takahashi about the effects of reducing the ASTRID project in France to “technical cooperation,” as well as the ideal form of fast reactor development as led by the private sector.

Considering the foregoing, and in terms of the Japanese nuclear industry’s international contribution, the president stressed in his response that Japan’s key “selling points” were the high estimation given to Japanese quality and technological capabilities overseas, as well as to Japan’s management skills, including constructing NPPs “on time, on budget.”