On June 21, President Akio Takahashi of the Japan Atomic Industrial Forum (JAIF) gave his monthly briefing to the press. 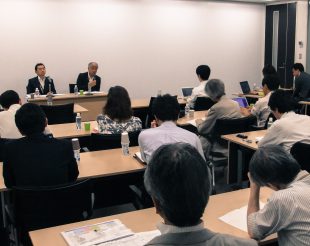 He began with an outline of recent developments, noting that the draft of the fifth national Strategic Energy Plan was expected to be approved by the Cabinet as early as July. He also pointed out that the Genkai-4 Nuclear Power Plant (PWR, 1180MWe), owned and operated by the Kyushu Electric Power Co., had resumed commercial operation.

In addition, Takahashi mentioned that the decommissioning of all four units at Fukushima Daini (Fukushima-II) was being considered. He also said that the Atomic Energy Association (ATENA) was to be established next month (July), aiming at substantive improvement in NPP safety.

In a Q&A session, the JAIF president said that Japan would need some thirty nuclear power plants—the exact number depending on their availability factors—for it to achieve the country’s goal of getting nuclear power to account for 20-22% of the total energy mix by the year 2030.

Given that targets for climate change measures are an international commitment, also, he called upon the national government to extend the operating lifetimes of existing NPPs, as well as promote their restart. He also said that it was important to decommission ordinary plants economically and efficiently, so as to build and share a know-how base. He added that local companies could be contracted to do much of the work, except for the demolition of highly irradiated components.

Turning to the subject of British Horizon Nuclear Power’s project to build new NPPs, the JAIF president said that he thought it was a good opportunity for Japan’s nuclear industry to maintain and continue domestic technology while simultaneously making a global contribution in the form of high-quality NPPs.

Specifically, he said that it would be significant for the domestic nuclear industry to provide advanced boiling water reactor (ABWR) technology with proven operational results. He said that setting power rates would be important to the issue of cost recovery, which should be determined not just on the basis of economic efficiency, but also in reference to the selling price of power from the Hinkley Point C project in Somerset, England.

A problem for Japan in exporting its nuclear technology is whether it is capable of proposing projects that encompass a wide range of activities, including operation and maintenance, radiation management, and waste treatment, among other things. That is to say, just constructing the NPPs is not enough. To that end, he noted, power companies would be asked to cooperate with vendors.

Although President Takahashi said that he logically understood the concepts of “excess plutonium” and interchanges among the country’s power companies, he recalled the difficulties already experienced by each of those companies when they struggled to obtain understanding from local communities during the introduction of MOX fuel, adding that dealing with excess plutonium, too, would be a time-consuming and difficult issue.

Regarding the issue of dry storage of spent fuel within the premises of the Ikata NPPs, owned and operated by the Shikoku Electric Power Co., he said that dry casks were very sturdy, requiring no cooling, and that their use would increase. He voiced concern, though, about the ability to produce enough casks on time to keep up with the NPP decommissioning.

Finally, he cited the possible decommissioning the Fukushima Daini (Fukushima-II) NPPs, currently under consideration. As the former head of the site, he said that he could not help but feel a bit sorry about recent developments. In the Hamadori district of Fukushima Prefecture alone, 10 NPPs once required continual maintenance, and the skills and experience of the local workers there was very high. It was unfortunate, he said, that all those jobs would be lost.