On January 23, President Akio Takahashi of the Japan Atomic Industrial Forum (JAIF) gave a press briefing, in which a Q&A session was held with reporters on recent domestic and international movements regarding nuclear power. 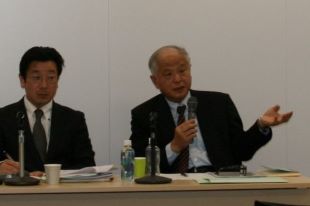 At the beginning of the briefing, Takahashi described as “quite regrettable” the temporary injunction issued by the Hiroshima High Court on January 17 to halt the operation of the Ikata-3 Nuclear Power Plant (NPP), owned and operated by the Shikoku Electric Power Co..

He then referred to more general energy issues in Japan, including the country’s target for reducing CO2 emissions and the limitations of solar and wind power, reiterating the important role that nuclear power can play.

Returning to the January 17 judicial ruling, he said that the domestic nuclear industry must be prepared for the next phase, including the need to explain nuclear power to siting areas and to society as a whole so as to obtain greater understanding.

Meanwhile, looking abroad, the JAIF president made reference to the approval given by the U.S. Nuclear Regulatory Commission (US-NRC) last month to extend the licenses of Turkey Point-3 and -4 NPPs in Florida (owned and operated by Florida Power & Light) for an additional twenty years, allowing them to operate for a total of eighty years.

He said that the NRC’s approval demonstrated the reactors’ technical feasibility, adding that the results would be “fed back” to Japan, highlighting the importance of obtaining information from overseas.

In the context of the extension of NPP operating lifetimes in Japan, Takahashi also explained the technical assessments of age deterioration, including neutron embrittlement in reactor pressure vessels. He also touched upon the economic advantages of extending lifetimes, citing a report prepared by the International Energy Agency (IEA).

Noting that a team of experts from the Integrated Regulatory Review Service (IRRS), recently dispatched to Japan by the International Atomic Energy Agency (IAEA), had cited the importance of regulatory bodies maintaining communication with the nuclear industry, the JAIF president stated his belief that it would be a challenging issue going forward, but concluded that he was pinning high hopes on the efforts of the Atomic Energy Association (ATENA).