At a press briefing on November 20, the Japan Atomic Industrial Forum (JAIF) released an overview of the results of its most recent annual Fact-finding Survey of the Japanese Nuclear Industry, for the fiscal year 2019 (ended March 31, 2020).

Questionnaires were distributed to companies engaged in the nuclear power field (including JAIF’s member companies), seeking information on their expenditures, sales, and numbers of employees. Valid responses were received from 248 of them (including eleven electric power companies, 226 mining and manufacturing firms, and eleven trading firms).

The combined number of nuclear-related workers in the electric power and mining and manufacturing sectors in Japan during the period was 48,728, almost unchanged from the year before.

Regarding business sentiment in the domestic nuclear industry, 78 percent of the survey respondents (responding in FY20, when the survey was conducted) described theirs as bad, down two points from the previous year, while those expecting it to be worse in one year’s time (FY21) grew to 27 percent, up three points. Since the March 2011 accident at the Fukushima Daiichi Nuclear Power Plants (NPPs), it has generally been hard to find anyone feeling positive about the business.

In response to a multiple-choice question about the effects of the shutdown of the country’s NPPs, respondents continued to point to difficulties in maintaining and continuing their technological capabilities (59 percent), as well as to reduced sales (58 percent). The most frequently cited examples of the effects on maintaining and continuing their capabilities were the decreased on-the-job opportunities, followed by difficulties in securing employees, as well as the dispersion of technology and know-how as companies withdraw from the field. 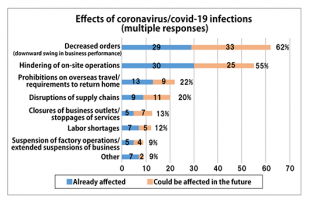 The major areas cited by the respondents as being affected by other company’s withdrawals from the field were engineers, technicians, and on-site workers (38 percent), as well as raw materials and steel (23 percent). At the same time, several firms mentioned that additional safety measures for NPPs had resulted in increased orders and/or improvements to technology.

As for issues in successfully maintaining the domestic nuclear power industry, the most commonly selected answer was—similar to last year—the consistent promotion of nuclear policy by the government (chosen by 73 percent), followed by the early restart of domestic NPPs and their stable operation (61 percent), and the restoration of public confidence in nuclear power (58 percent).

This survey also included questions about the effects of the continuing spread of COVID-19, with half of the respondents saying that were already affected, and 39 percent predicting that they could be affected in the future. In terms of specific effects, most respondents (62 percent) cited decreased orders (i.e., a downward swing in business performance), followed by a hindering of on-site operations (55 percent). See the table for further details.