On March 13, the Japan Nuclear Safety Institute (JANSI) held its Annual Conference 2019 in Tokyo, with approximately 430 representatives participating from Japanese and foreign nuclear-related companies and organizations. 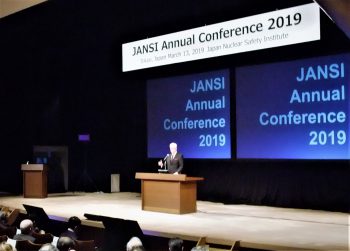 In his opening greeting, JANSI Chairman William Edward Webster, Jr., who assumed his post last year, referred to the upcoming issuance of a ten-year strategy for the institute, emphasizing that it would particularly try to improve its technological capabilities as a self-regulatory organization.

He kicked off the discussions at the conference by stating that questions of how to discuss, diagnose, promote and maintain safety culture within organizations were precisely at the core of JANSI’s mission.

After a keynote presentation by Chairman Satoru Katsuno of the Federation of Electric Power Companies (FEPC), entitled “Activities of the Industry based on Lessons from the Fukushima Daiichi Accident,” other participants from overseas and non-nuclear industries gave speeches, including OECD/NEA’s Yeonhee Hah, head of the Division of Human Aspects of Nuclear Safety (HANS), and President Shinichi Inoue of the Japan Aircraft Pilot Association (JAPA).

In her speech, Hah first talked about OECD/NEA’s HANS activities seeking to understand how the particular conditions in each country affect safety culture, then played a video of a role-playing session. In her statement, she stressed, “When it comes to safety culture, the state of affairs in individual countries must be taken into consideration. This is not a disincentive. It must be made use of as a strength.”

As an effective example from a non-nuclear industry of the fermentation and permeation of safety culture, JAPA President Inoue, in his speech at the conference, introduced the concept of assertiveness as practiced by ANA pilots. Whenever a pilot has doubts about something, he said, he or she must speak out—asserting it clearly—even to a superior officer. Such assertiveness may lead to new opinions or proposals, he added, letting everyone be aware that “participation is positive.”

Representing the domestic nuclear industry, President Hiroya Harada of the Tohoku Electric Power Co. told the conference participants that as the head of his company’s management, he always speaks about the concept of safety culture, be it in his New Year’s messages or briefings to new employees. Given his company’s mission of “contributing to the local community,” he emphasized that each employee should work hard to convey to the community, in his or her own words, the attitude of improving safety.

Also speaking was President Akira Ono of the Fukushima Daiichi Decontamination & Decommissioning Engineering Company, who cited the rule requiring staff members to hold onto staircase railings to prevent accidents at nuclear power plants. He emphasized that top management must take the initiative and have the fortitude to put words into practice every day. He also referred to the special situation of the Fukushima decommissioning site, saying that there are “fifty or more general contractors involved.”

In response to that, Mr. Takano from the JANSI Advisory Committee said that the issue was how to get companies committed to the penetration of safety culture, given the inevitable existence of “walls”—different attitudes and interpretations—between organizations.

Adding to the discussion, Tohoku Electric President Harada Power said, “A report is an asset. Instead of being angry when receiving a bad report, it is better to respond to it by saying ‘It’s good that you reported this early.’” He stressed the need to strive to create an atmosphere where anyone can express his or her opinions freely.

Next to speak on the issue was OECD/NEA’s Hah, having taken the lead in the working group addressing communication with stakeholders at her organization. She said that people with differing opinions are sometimes challenged by the fear of facing a “bad report.” She added that it was important to develop a culture of “learning from the experience of failure.”

After that, Dr. Masahide Wakakura, executive director of the Japan Safety Competency Center, presented a five-stage evaluation of safety culture in the chemical industry. Referring to current circumstances in Japan, he said, “Although practical ability—called genba-ryoku in Japanese—is Japan’s strong suit, gaps have started to appear due to the retirement of experienced engineers and workers.”

Regarding the continuation of technology, he added that since experienced people in Japan had been taught to “stand behind the master and watch,” they were not particularly good at teaching and explaining things logically, while younger employees often found it hard to question their seniors.

He concluded by saying that safety culture had to be fermented and permeated through dialogues, starting with “thinking together” rather than having one person simply teaching another.