On April 23, the Japan Nuclear Safety Institute (JANSI) held a briefing and discussion meeting in Tokyo. After a report was delivered of the institute’s activities in fiscal 2014 (ended March 31, 2015), the presidents of Japan’s electric power companies took to the platform, along with various experts and specialists, for panel discussions on the role of the Japanese nuclear power industry and its responses to crises. 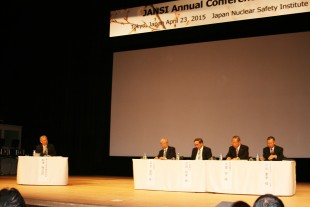 At the initial briefing session, Chairman Shunichi Tanaka of the Nuclear Regulation Authority (NRA) delivered his keynote address. He said that since Japan’s new regulatory standards came to effect in July 2013, the NRA has held compatibility examination meetings more than 200 times after receiving applications from the power companies.

Saying that heavy burdens were to be borne by both NRA, as the regulator, and the nuclear operators, he stressed that the two sides have reached a certain level of common understanding, indicating his partial satisfaction with the current situation.

He also referred to the open meetings that his organization has held with the presidents of all of Japan’s power companies to exchange views. Tanaka said that they have served as valuable opportunities to pursue improvements to nuclear safety apart from normal examination proceedings.

Now that the first round of those open meetings has been completed, Tanaka said he expected JANSI to take the initiative in continuing substantive discussions on the matters.

Several panel discussions were held after the keynote address, including one on “what the Japanese nuclear industry needs to do.” Chairman Shigeyuki Koide of the Japanese Association of Science and Technology Journalists (JASTJ) referred to how the March 2011 nuclear accident at the Fukushima Daiichi not only caused the collapse of communities in the region, but also triggered various unfounded fears and rumors.

Meanwhile, President Tomohide Karita of the Chugoku Electric Power Co., looking back at his firm’s poor handling of maintenance practices revealed in 2010 at the Shimane NPPs, said that there was a “gap in thinking” on safety between engineers and the public. He emphasized the importance of “efforts to be understood using one’s own words.”

Next to speak was President Michiaki Uriu of the Kyushu Electric Power Co., who said that he had conveyed the message to everyone in his company that that “there is nothing for us to change,” referring to the recent favorable court decision denying a temporary injunction against restarting the Sendai NPPs.

He emphasized that Kyushu Electric Power would continue striving for dialogue with local communities based on the so-called “my plant” awareness, referring to the effort to make workers feel closer to and more responsible for the reactor facilities under their care.

In a panel discussion on improving crisis responses, Executive Vice President Naotoshi Yoshikawa of the Central Japan Railway Company spoke about the measures adopted by his company to protect the Tokaido Shinkansen (bullet train) against earthquakes and tsunamis, based on the lessons learned from the giant earthquake of March 11, 2011. His comments were seen as having value to the nuclear industry as well.

Finally, JANSI Chairman Shojiro Matsuura urged nuclear operators to conduct drills in preparation for nuclear emergencies. He referred to his own mountain-climbing experiences, comparing nuclear responses to those made during alpine accidents.