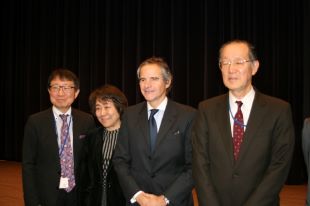 In his opening greeting, Naokazu Takemoto, Japan’s minister of state for science and technology policy, expressed gratitude for the broad range of support Japan that receives from the IAEA, including a review mission to examine the decommissioning of the Fukushima Daiichi Nuclear Power Station (NPS).

Referring to his own participation as Japan’s representative in the IAEA General Conference last autumn, the minister told the director general that that he welcomed the opportunity to exchange views with him during his visit to Japan. He added that Japan would work to boost the promotion of nuclear uses for peaceful purposes and strengthen the international nuclear nonproliferation regime, in close coordination with the IAEA.

Since entering Argentina’s foreign service in 1985, Director General Grossi has served in a number of diplomatic posts and international organizations. He has  visited Japan many times during the past thirty-five years, with this being his first visit since assuming his present post two months ago. He expressed his admiration and respect for the achievements of his predecessor, Yukiya Amano, who had led the IAEA for ten years and who passed away in July 2019.

Grossi said that nuclear power in Japan “has had its own problems,” referring to the decommissioning of the Fukushima Daiichi Nuclear Power Station (NPS), but expressed high hopes that Japan would “exert leadership” in a broad areas of science and technology, including nuclear uses in medicine, in addition to nuclear power.

Noting that there are countries—China and India, along with several in the Middle East, Africa and elsewhere—which are actively pursuing and promoting nuclear power, while some are turning away from it, he reiterated its role in resolving global climate change issues. He also said that his organization rejects no country seeking its help, and is generous with its support.

The director general continued by talking about the importance of establishing the use of radiation and radioisotopes in developing countries to improve medical care and ensure food and water resources. At the same time, he noted the IAEA’s own budgeting limitations as an international organization, adding that he hoped for further support from Japan, including cooperation in various forms from the private sector.

In response, JAEA commissioner Toshio Sano asked Grossi about what the IAEA was doing toward increasing women’s participation and improving gender balance in nuclear fields. He replied by saying that his organization would soon launch a new fellowship in honor of the achievements of Madame Curie, in order to support women researchers financially.

Meanwhile, in response to a question from JAEA commissioner Tomoko Nakanishi about the IAEA’s strategy for educating about and promoting uses of radiation, the director general said that more communication channels, including to the public, were necessary.

Next, JAIF President Takahashi told Grossi about his organization’s efforts to develop human resources, including exhibits staged in association with the IAEA General Conference and a management school carried out in cooperation with the IAEA.

Before his departure from Japan on February 28, Director General Grossi also had plans to talk with relevant cabinet ministers, as well as to visit the Fukushima Daiichi NPS on February 26.