On July 16, the Japan-IAEA Nuclear Energy Management (NEM) School opened at the Hongo Campus of the University of Tokyo, aimed at training the next generation of leaders in the realms of nuclear policy, regulation, project planning and management. 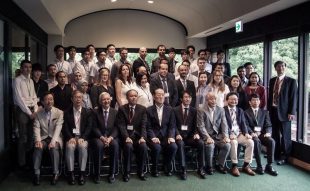 This year, 36 students are participating in the program from Japan, Brazil, India, Indonesia, Jordan, Kazakhstan, Lithuania, Mexico, the Philippines, Poland, Saudi Arabia, Thailand and Turkey. Until August 1, they will attend a couple dozen lectures on such subjects as energy strategy, radioactive waste management, nuclear safety and security, and nuclear nonproliferation.

They will further deepen their understanding through group work and visits to plants and facilities. At the end of the course, a diploma will be presented to all those who pass a final exam.

This is the eighth time that the annual NEM school has been held, co-sponsored by IAEA, since the first one in 2012, which was launched in the wake of the accident at the Fukushima Daiichi Nuclear Power Plants.

This year, in addition to regular visits to Fukushima Prefecture to see the Fukushima Daiichi and Fukushima Daini NPPs and the Naraha Remote Technology Development Center (owned by the Japan Atomic Energy Agency (JAEA)) in Naraha Town, the participants will also travel to Fukui Prefecture, where they will visit the Ohi NPP, owned and operated by the Kansai Electric Power Co. They will also hear explanations from Fukui authorities on prefectural activities to ensure nuclear safety.

At an opening ceremony on July 16, Mitsuru Uesaka, professor at the Nuclear Professional School in the University of Tokyo’s Graduate School of Engineering, and concurrently chairman of the IAEA NEM School Executive Committee, noted the high regard in which the NEM educational program was held. He exhorted the participants by telling them, “Enjoy your studies!”

Following the ceremony, JAEC’s Oka was the first to deliver a lecture to the students, talking about the utilization of nuclear energy, thus kicking off the NEM school’s two-week program.