At the 62nd General Conference of the International Atomic Energy Agency (IAEA), held at the Vienna International Center (VIC) from September 17 to 21, the Japan Atomic Industrial Forum (JAIF) opened the Japanese booth in cooperation with the national government and private-sector organizations from Japan. 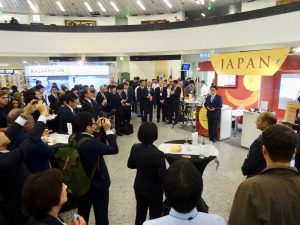 The booth featured various exhibits on the country’s peaceful uses of nuclear energy under the main theme of “Life, Safety and Prosperity.” Among other things, 3-D videos were shown, and models displayed.

The opening ceremony for the booth took place on the first day of the general conference, with State Minister Masaji Matsuyama for Science and Technology Policy, the Japanese delegate to the conference, attending and delivering prepared remarks.

At the ceremony, Matsuyama first emphasized the potential of nuclear technology in contributing to the enhancement of people’s lives in such areas as food production, medical care and environmental protection, not to mention power generation.

He also explained to visitors that, at the booth, they could see such things as heavy particle therapy equipment for medical use, 3-D images of a nuclear reactor building (photo, below), and panels describing the decommissioning of the Fukushima Daiichi Nuclear Power Plants. 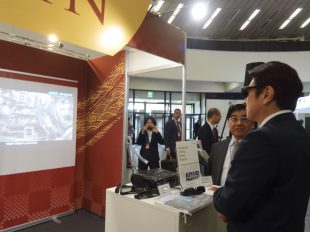 The minister concluded by pledging that Japan would continue to cooperate with the IAEA in promoting nuclear energy for peaceful purposes.

Following the minister’s comments, JAIF President Akio Takahashi led a cheer among the people present—a hundred or so—for the success of the exhibition. They were then treated to Japanese sake produced in Fukushima Prefecture. The first day saw some 270 visitors drop by at the booth.

At the conference, Japan positively demonstrated the state of its nuclear policy and practices to governmental people, professionals in the nuclear field, and IAEA-related parties gathering from all over the world.

The videos shown illustrated the history of Japan’s nuclear development and utilization, as well as future prospects. They also depicted such topics as the progress in decommissioning the Fukushima Daiichi NPPs.