On March 17, the Japan Atomic Energy Relations Organization (JAERO) released the results of its latest nationwide public opinion survey on nuclear power, conducted in FY19 (April 2019 to March 2020). The surveys have been carried out by JAERO since FY06 to understand changes in public opinion on nuclear energy over time. Because they illustrate the points of view and levels of awareness of people receiving the information being disseminated, they assist in shaping informational activities and contribute to the further spread of knowledge and understanding. 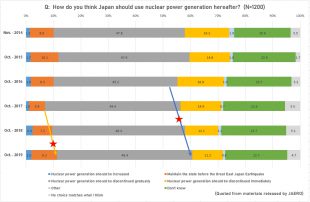 The present survey was conducted last October among men and women aged 15 to 79 across the country, and 1,200 responses were obtained.

Asked what Japan should do with nuclear power in the future, the respondents most frequently said that it should be discontinued gradually, at 49.4 percent, followed by those who said they didn’t know, at 22.7 percent, for a total of 72.1 percent. Meanwhile, some 11.3 percent of the respondents were positive toward nuclear power—combining the ratio of those supporting an increase (2.0 percent) with the ratio of those supporting the pre-earthquake status quo (9.3 percent), that is, from before March 11, 2011—increased for the third year in a row.

Percentages answering “Don’t know” were higher for those in their teens and 20s to 30s, and for women overall, by 7.0 points, 4.8 points and 5.8 points, respectively. From that, JAERO has concluded that the public’s views on nuclear energy have become slightly more positive during FY17-19, based on which it feels that further efforts are needed to provide especially teens and women with opportunities to get information on nuclear power.

The next question in the survey concerned people’s attitudes toward restarting nuclear power plants (NPPs) in Japan. The answers, ranked in order of frequency, were as follows:

Asked about what kind of energy Japan should use in the future (multiple answers possible), the respondents most commonly mentioned solar power (75.5 percent), wind power (62.8 percent), hydropower (51.8 percent) and geothermal (40.0 percent), the same order since the massive earthquake of 2011. The ratio citing nuclear energy was 16.3 percent, slightly lower than the previous year’s 17.3 percent. There was also a significant gap between the ratio of men supporting nuclear energy (23.1 percent) and the equivalent figure for women (9.7 percent).

Respondents were asked various questions seeking to identify what kind of information they were receiving about nuclear power, radiation, and energy, with a focus on high-level radioactive waste (HLW). The questions covered such topics as the history of geological disposal options, the determination of HLW disposal methods in Japan, HLW volumes, the current status of HLW storage, the three-step selection of an HLW disposal site, how to proceed to the next stage, how HLW disposal in other countries is facing a tough path, and which countries were advanced in disposal.

Some 32.7 percent of the respondents had heard about the current status of HLW storage, with 21.7 percent aware of the tough path being faced by HLW disposal in other countries. More men knew about such topics than women, and more in their 60’s to 70’s knew about them than other generations. An overwhelmingly high percentage—93.8 percent—said that they could not explain any item, while a little more than half—50.2 percent—said that they have not heard about any of them, demonstrating a low recognition of HLW issues compared with the general areas of nuclear power, radiation and energy.

When asked what image they had of nuclear power, the respondents most commonly used such words as “dangerous” and “anxiety.” Both of those answers have held the top positions in the annual survey since even before the accident at the Fukushima Daiichi NPPs, and the percentage of negative replies remains high in general. On the other hand, more respondents came to describe nuclear power as “necessary” and “helpful,” perhaps owing to the increasing volume of available information.