On November 18, the Agency for Natural Resources & Energy (ANRE), under the Ministry of Economy, Trade and Industry (METI), announced results for Japan’s energy supply and demand in fiscal 2019 (preliminary report), which ended on March 31, 2020. 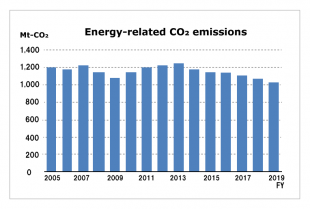 Final energy consumption was 12,959 petajoules (PJ), down 2.0 percent from the previous year. The total domestic supply of primary energy was 19,104 PJ, falling 3.1 percent. Fossil fuel consumption decreased for the sixth consecutive year, while non-fossil energy use (including renewable energies and nuclear energy) expanded for the seventh year in a row.

Nuclear power had increased every year since domestic nuclear plants were first restarted in FY15 after being shut down in March 2011, but fell in FY19 by 3.2 percent year-on-year. Meanwhile, renewable energies grew by 7.6 percent, the smallest such increase in the last several years. 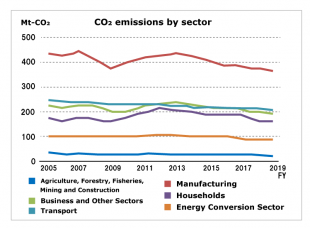 Japan’s energy-derived CO2 emissions reached 1.03 billion tons during the fiscal year, down 3.4 percent from the year before, and declining for the sixth year in a row. They are now 16.7 percent below where they stood in FY13. Meanwhile, CO2 emission intensity for electric power (net) was 0.47 kg-CO2/kWh, an improvement of 2.6 percent.

At a November 17 meeting of the Strategic Policy Committee of METI’s Advisory Committee for Natural Resources and Energy, participants discussed the realization of net zero greenhouse gas emissions by 2050—so-called “2050 carbon neutral”—a goal put forward by Prime Minister Yoshihide Suga in his first policy address at the opening of an extraordinary Diet session in October.

The next Strategic Energy Plan, based on a balance of “3E+S” (energy security, economic efficiency, and the environment, plus safety), will demonstrate the country’s courses of action and policies toward the goal of being carbon-neutral by 2050, recognizing that all available power sources should be used to the fullest extent, including renewable energies and nuclear energy.