The Nuclear Regulation Authority of Japan (NRA), at a regular meeting on November 11, approved changes to the business of the Recyclable-Fuel Storage Center, owned by the Recyclable-Fuel Storage Company (RFS), in Mutsu City, Aomori. The move came after NRA determined that the facility was compatible with the new regulatory standards in the Law for the Regulation of Nuclear Source Material, Nuclear Fuel Material and Reactors (the Reactor Regulation Law). 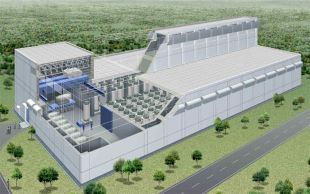 A draft review report on the matter, which was issued on September 2, was referred to the Japan Atomic Energy Commission (JAEC) and the Ministry of Economy, Trade and Industry (METI), and later made open to the public for comments.

At the facility, spent fuel generated at reactors of the Tokyo Electric Power Co., Inc. (TEPCO) and the Japan Atomic Power Company (JAPC) will be safely stored and managed until it is reprocessed. The center will eventually be able to store 5,000 tons, about one-fifth of the present domestic storage capacity.

In 2013, a storage building (the first building) was completed at the site, and three years later, an application was filed for an examination to confirm compatibility with the new regulatory standards. It took almost four years for the facility to obtain approval for the business change.

In other compatibility examinations of nuclear fuel cycle facilities, changes were approved on July 29 to the nuclear spent fuel reprocessing business of Japan Nuclear Fuel Ltd. (JNFL) at its Rokkasho Reprocessing Plant. A draft review report was issued for JNFL’s MOX Fuel Plant (JMOX) on October 7.

At a press conference held after the November 11 meeting, NRA Chairman Toyoshi Fuketa commented on the examination of the center, saying, “Although the facility is a very passive facility generally, and there was not much discussion on safety matters, the process took a very long time.”

Upon receipt of the approval, the Recyclable-Fuel Storage Company released a comment, as follows: “We recognize that there can never be an end to safety improvement activities. With that in mind, we will endeavor, with all our strength, toward the start of operations.”