On September 21, Japan's cabinet and other ministerial officials responsible for nuclear energy held a meeting reaffirming the country's continuing commitment to the nuclear fuel cycle and fast reactor R&D. It also set out the approach for dealing with the prototype fast breeder reactor (FBR) Monju, which may be decommissioned.

At the meeting, it was also decided to establish a so-called “conference on fast reactor development,” consisting of representatives from the Ministry of Economy, Trade and Industry (METI), who will take the initiative, as well as the Ministry of Education, Culture, Sports, Science and Technology (MEXT) and the Japan Atomic Energy Agency (JAEA), along with the country’s electric power utilities and nuclear power reactor vendors.

At the ministerial meeting, METI Minister Hiroshige Seko explained the nuclear fuel cycle mechanism and its position within the government’s strategic energy plan, which was revised in April 2015. From the viewpoint of effectively using resources and reducing the volume of high-level radioactive waste (HLW), the basic policy is to complete the nuclear fuel cycle and reprocess spent fuel, separating and extracting uranium and plutonium and reuse it as MOX fuel.

Japan, under the principle of not holding plutonium without a specific purpose, will steadily promote the reprocessing and plutonium use in light water reactors (LWRs) in the MOX-use program and carry out fast reactor R&D through international cooperation. The eventual aim is to realize a commercially practical fast reactor cycle that would be more effective in reducing the volume of HLW.

The conference on fast reactor development will address such matters as: (1) setting a target for completing a demonstration fast reactor and a specific roadmap, (2) gathering and organizing information on Monju, (3) using the experimental fast reactor known as Joyo, and (4) designing measures to reinforce international cooperation and human resource development.

Prior to the giant earthquake of March 11, 2011, Fast Reactor Cycle Technology Development Project (the “FaCT Project”), operated jointly by Japan’s public and private sectors as well as academia, had been pursuing the development of demonstration and commercial fast reactors toward commercialization by 2050 or so.

Meanwhile, as for Joyo, JAEA is preparing to file an application with the Nuclear Regulation Authority (NRA) by the end of the year end for an examination of the reactor’s compatibility with the new regulatory standards.

Regarding international cooperation, the French and Japanese governments have already agreed that Japan will participate in the basic design and R&D for the French project to develop the Advanced Sodium Technological Reactor for Industrial Demonstration (ASTRID, 600MWe)—a demonstration fast reactor—setting the target of achieving first criticality circa 2030.

According to a fact sheet on nuclear topics from a meeting last October between French Prime Minister Manuel Valls and Japanese Prime Minister Shinzo Abe, the two countries will further strengthen their strategic partnership via such projects as possibly cooperating on the development of fast reactors, including the ASTRID project, and opening a way for using both Monju and Joyo.

In May 2015, Japan’s NRA, recognizing a series of maintenance and management problems at Monju attributable to JAEA, issued a directive preventing preparations for restarting Monju. In November 2015, it issued a recommendation to MEXT (the ministry with direct authority over JAEA) to either find and specify another main operational body to replace the agency or else make a fundamental review of Monju’s future. It told the ministry to reply in half a year or so.

A special committee under MEXT then issued a report in May of this year detailing requirements for an appropriate operating body for Monju. According to an official in charge of the matter, the ministry will reply to the recommendation after the conference on fast reactor development draws up the relevant policy. 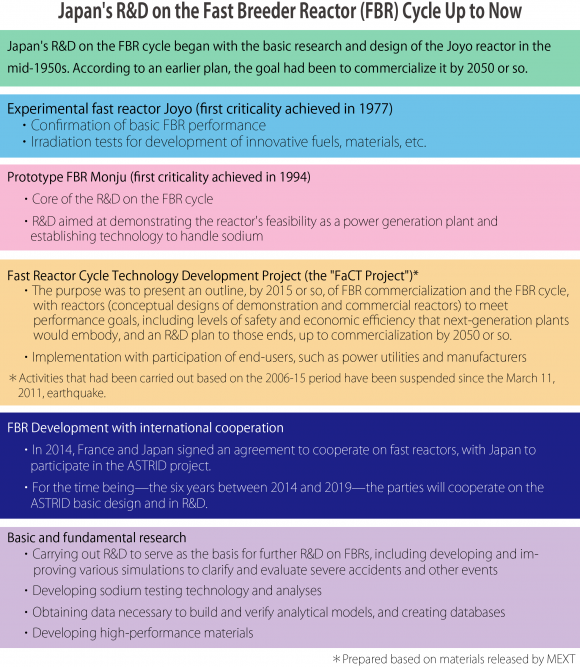