On July 7, Hitachi, Ltd. of Japan, the Japan Atomic Power Company (JAPC) and Horizon Nuclear Power, a British nuclear energy company that is a wholly-owned Hitachi subsidiary, announced that they had signed a deal to provide technical support services for the construction of a new ABWR (advanced boiling water reactor) at Wylfa Newydd, located on the Isle of Anglesey in North Wales. Operation of the plant, currently in the stage of licensing and authorization, is targeted to begin in the early 2020's. 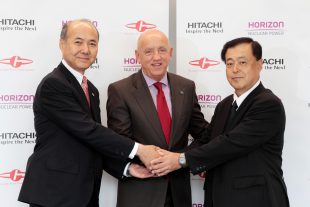 Based on the agreement, the three firms will draw upon JAPC’s experience and know-how stemming from its many years as a pioneer in the development of nuclear power as they engage in the following activities, among others: assessing the costs of constructing the nuclear power plants at Wylfa Newydd, carrying out work aiming at the conclusion of an EPC (engineering, procurement and construction) contract, acquiring the necessary licenses and authorization, including the site license and PCSR (pre-construction safety report), and drawing up plans for trial operation and for various forms of maintenance once operation commences.

By 2018, Horizon and Hitachi hope to get all the necessary licenses and authorization from the UK government for the construction of the Wylfa Newydd Power Station—which represents Horizon’s first project—including the site license. They are also aiming to begin construction by 2019, and start operation of the first reactor in the early 2020’s. The project is steadily moving forward, with Horizon recently having appointed the international Menter Newydd consortium—composed of Hitachi Nuclear Energy Europe, Bechtel of the United States and JGC Corporation of Japan—in May to serve as the supplier providing engineering services for the construction of the plant, through to the stage of the conclusion of the EPC contract. As for preparations being made toward the beginning of construction work, a team of corporations specializing in geotechnology has recently launched detailed studies of the sea floor in the vicinity. Additionally, insofar as the technical license for the ABWR—Britain’s first—is concerned, the UK Office for Nuclear Regulation (ONR) is steadily working on the generic design assessment (GDA), aiming at its completion by the end of 2017.

JAPC, as a pioneer of nuclear power, has previously been involved in the construction, operation and decommissioning of Japan’s first commercial NPP. Overseas, the company is also helping several emerging countries—including Vietnam and Kazakhstan—that are preparing to introduce nuclear power for the first time, extending them assistance in the form of technological support and personnel training. Their cooperation with JAPC will allow Horizon and Hitachi to enlist that company’s experiences and achievements in Japan in order to accelerate the project to build the Wylfa Newydd Power Station, enabling them to safely provide five million households in the United Kingdom with a low carbon-emitting electric power supply.

In reference to the July 7 conclusion of the contract, the leaders of the three participating companies expressed their hopes and goals, with Horizon CEO Duncan Hawthorne stating, “It’s another strong sign of the progress we’re making.” JAPC President Mamoru Muramatsu said, “Taking advantage of the many years of operating experience, and the know-how gained from that experience, … we will help to ensure that Wylfa Newydd is built successfully.” Lastly, CEO of Hitachi’s Nuclear Power Business Unit commented, “[It] will significantly advance the construction of the new nuclear power plants at Wylfa Newydd.”