On September 23, a ceremony was held in Tokyo to mark the completion of a two-year training course for engineers who will become the future leaders of nuclear power plants (NPPs) in Vietnam. Nine trainees received their diplomas, having completed the two-year course of study. The course is part of a human resource development program to promote nuclear power projects in Vietnam. 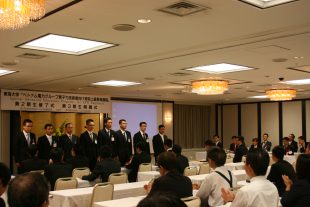 Established in 2010 for the purpose of making proposals for nuclear power projects in newly emerging nations, the International Nuclear Energy Development of Japan Co., Ltd. (JINED), has conducted training in cooperation with Tokai University since 2012.

The training is characteristic in the sense that it includes enhancement of the trainees’ Japanese language abilities and experience with Japanese culture and practices, in addition to professional education in the nuclear field, and on-site training at nuclear power and manufacturing facilities.

The target is to train sixty or so people from a group selected by the Vietnam Electricity (EVN) to be NPP candidate-executives. In the inaugural class of 2012-2014, fifteen students completed the training. At the completion ceremony for this second class, there was special recognition of three trainees who had achieved excellent results in the course.

Vietnam is currently planning to construct four 1,000-MWe class NPPs—two each at two different sites—in Ninh Thuan Province in the south central region of the country. In 2011, JINED and EVN concluded a cooperation memorandum for the second site, Binhai, for which Japan has been selected as the construction partner. 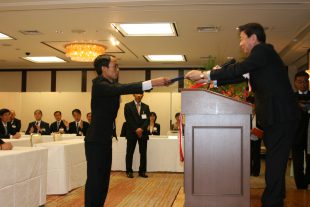 In presenting the diplomas and praising the academic performance of the trainees, Chancellor Kiyoshi Yamada of Tokai University said, “I offer my sincere respect to the trainees who have completed this high-level program.” He also said that the school, using feedback from the participants, would endeavor to make the program even better in the future.

Meanwhile, President Akio Takahashi of the Japan Atomic Industrial Forum (JAIF), also president of the JAIF International Cooperation Center (JICC), addressed the graduates as a guest, saying, “We hope you will serve actively as a channel between Vietnam and Japan.”

One of the trainees, who had been recognized for his particularly excellent performance, looked back on his days in Japan, where he had devoted himself to his studies, saying that he always kept this principle in mind: “Do not be afraid to ask. By asking, you avoid eternal shame.” He said that his hope was to make full use of what he had learned in Japan when he got back home.

An opening ceremony to welcome the new eight trainees of the third class was held concurrently with the closing ceremony for the second class.