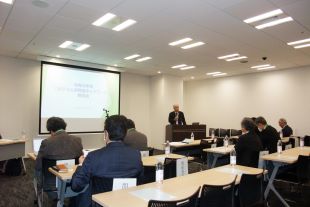 Besides a presentation of the network’s activities in FY19, a keynote address was given by Chairman Nobuo Tanaka of the Sasagawa Peace Foundation, followed by a session focused on activities to improve gender balance in nuclear fields. Throughout the day, participants from the fields of academia, industry and government discussed various issues in securing and fostering nuclear human resources in the future.

In his address—entitled “Strategy for Sustainable Energy Security”—Tanaka talked about the increasing demand for oil in China and India expected through 2040, according to the World Energy Outlook (WEO), issued annually by the International Energy Agency (IEA). He also touched upon recent geopolitical tensions in oil-producing countries.

Referring to changes in energy-derived CO2 emissions globally, as reported by the IEA on February 11, the Sasagawa Peace Foundation chairman said, “We are now in a transition from an oil age to an electricity age.” He pointed to the expense of constructing nuclear power plants (NPPs) in comparison with the costs for wind power and solar power, and stressed the importance of maintaining competitiveness in the power market by extending NPP operating lives as much as possible.

Tanaka also referred to standardization of reactor types, saying that it was necessary “to begin, as soon as possible, the development of small module reactors (SMRs), which are characterized by their high levels of safety and proliferation-resistance.”

Next, Vice President Chisato Miyaura of the Tokyo University of Agriculture and Technology (TUAT) gave a keynote presentation—entitled “Activities to Foster Women Researchers and a National Network”—in which she spoke about improvements to gender balance in the fields of science and technology at her university. TUAT, she said, had steadily made various efforts—ranging from career support in the form of creating the Women’s Future Development Organization in 2009, to the renovation of facilities, including ladies’ restrooms—adding that they had boosted the ratio of women students in technological fields to more than 20 percent, the highest in the nation.

Additionally, Miyazawa cited a national network of more than 140 universities and research institutes in Japan that has been established to exchange information toward the improvement of the environment for women researchers. She said that women account for around just 15 percent of all researchers in Japan, the lowest level among OECD member countries. She attributed that situation to the failure to fully explain to women the attractions of working as researchers, as well as to the perceived difficulties in making research a career.

In December, the OECD Nuclear Energy Agency (OECD-NEA) held a conference in Paris to improve gender balance. At the February 12 JN-HRD Net session in Tokyo, Kinichi Ueda of JAIF’s International Division reported on his participation in that conference.

Ueda began by presenting data demonstrating that women account for only 22.4 percent of the nuclear sector worldwide. According to him, the factors preventing greater participation by women—based on presentations of activities by participants from other countries, and discussions—include preconceived ideas about women, problems of work-life balance, and the negative image of nuclear power. He stressed the need to continue gathering data and communicating on the issues.

Noting further that young men and women are already diverging in their job and career expectations by the age of fifteen, Ueda emphasized the importance of addressing the matter in elementary and secondary education.

Next, Kaoruko Nohara of the International Affairs Group of the Nuclear Damage Compensation and Decommissioning Facilitation Corporation (NDF) talked about the international mentoring workshop known as “Joshikai (Women’s Get-together) in Fukushima,” held in Fukushima Prefecture in August 2019, co-sponsored by the NDF and the OECD-NEA. The workshop, she said, aimed to encourage women in junior and senior high schools to pursue science and technology.

JN-HRD Net, believing it necessary to develop nationally consistent strategies to secure and foster nuclear human resources effectively and efficiently, has formed a strategy working group under which it will adopt a PDCA (plan, do, check, act) approach to existing activities, and strengthen cooperation in human resource development with relevant governmental offices.

The attention of the session turned next to higher education. Dr. Mitsuru Uesaka, a professor at the Nuclear Professional School of the Department of Bioengineering at the School of Engineering in the University of Tokyo, spoke about the vision for a future research reactor to be built at the site of the prototype FRB “Monju.” He proposed that current students be made part of process by giving them research options and preparing design storyboards.

Lastly, Dr. Kazuhiko Kudo, professor emeritus at Kyushu University, who has studied textbooks in science and sociology used in Japanese junior and senior high schools, said, “Engineers need to have an ethical view. The ideal image of an engineer should also be considered.”