On May 8, the central solenoid of the JT-60SA—a superconducting-coil tokamak plasma test device—was installed at the Naka Fusion Institute in Naka City, Ibaraki Prefecture, built by the National Institute for Quantum and Radiological Science and Technology (QST). 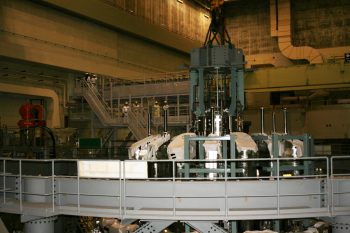 At some 2m in diameter, 7m high, and weighing about 100t, it is one of the largest magnetic coils in the world. A large press contingent was on hand to watch as the solenoid was slowing inserted among the D-shaped torodial-field (TF) coils at the core of the JT60-SA.

The JT60-SA project is part of broader approach (BA) activities between Japan and Europe in support of the International Thermonuclear Experimental Reactor (ITER) Project, a multinational effort to demonstrate the scientific and technical feasibility of nuclear fusion energy. Taking advantage of the smaller scale of the JT60-SA (about half that of ITER), data will be gathered to contribute to achieving the ITER’s technical targets, and will be reflected in the operational stage to come.

The JT60-SA will also be used for supplemental research in anticipation of the design of a prototype reactor to demonstrate power generation and economic efficiency, as well as serve in the development of human resources to lead R&D in the next generation.

In tokamak-type nuclear fusion, plasma is confined in a doughnut-shaped magnetic basket. The central solenoid provides high-voltage current to the plasma on the same theory as “IH” induction-cooking devices and wireless chargers. The installation of the central solenoid has thus marked a major step toward the completion of the JT60-SA. 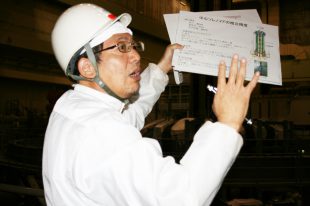 With the conclusion of an agreement on BA activities in 2007, and after three years of dismantling the previous JT-60 experimental device, the assembly of the JT60-SA began in January 2013.

Production has begun of equipment, facilities and components under a further procurement agreement between Japan and Europe. With the installation of the cryostat base (manufactured in Spain) in March 2013, the construction went into full swing. There have been no major problems in assembling the JT60-SA so far.

The work has now entered the final phase—including the installation of the cryostat, thermal shields to cover the main device, and peripheral devices—toward its completion in March of next year. Plasma is slated to start being generated in September 2020 (first generation).