On February 12, Japan's Kansai Electric Power Co., Inc. (Kansai EP) filed an application with the Nuclear Regulation Authority (NRA) for approval of its decommissioning plans for the Mihama-1 and -2 Nuclear Power Plants (PWRs, 340MWe & 500MWe respectively). The Japan Atomic Power Company (JAPC) did the same thing on the same day for its Tsuruga-1 (BWR, 357MWe). 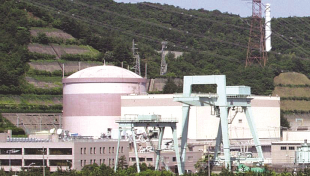 All three reactors were shut down in April 2015. The entire decommissioning process will require until FY45 (April 2045 to March 2046) for the two Mihama plants and until FY39 (April 2039 to March 2040) for Tsuruga-1. Among the five NPPs shut down and slated for decommissioning during the same period, the Kyushu Electric Power Co. had already filed an application in December 2015 for its plan for the Genkai-1.

As the NRA already said it would do for Genkai-1, the three NPPs for which applications were filed this time will undergo examinations to confirm that the plans meet the standards provided in relevant laws.

In order to facilitate safe, steady decommissioning of the two units, Kansai EP established a Decommissioning Technology Center in June 2015 at its Nuclear Power Business Headquarters. The center will supervise decommissioning-related operations, including the promotion of technological development and coordination and cooperation with other operators.

At all the NPPs, radioactive solid waste will be separated according to the radioactivity level and disposed of at a waste disposal facility before decommissioning is finished. Solid waste below a designated clearance level (0.01mSv per year) will be recycled as much as possible.

Prior to the February 12 application filings for Mihama-1 & -2 and Tsuruga-1, the nuclear operators concluded separate agreements with Fukui Prefecture and with the siting municipalities on ensuring safety, protecting the environment and enhancing regional development.