It gives me great pleasure today to make a few comments welcoming you to the 49th JAIF Annual Conference. 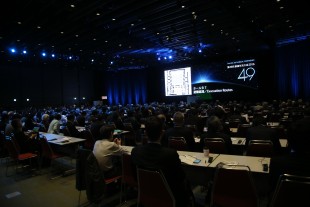 Introduction
More than five years have passed since the giant earthquake of 2011, known in Japan as the Great East Japan Earthquake, which caused the accident at the Fukushima Daiichi Nuclear Power Plants.
While residents evacuated from the area of the reactor site are gradually starting to return home, thanks to such developments as the evacuation order having been lifted at Naraha Town, whose inhabitants had all moved away, there are still around 100,000 people who still are being forced to live apart from their beloved hometowns. I would like to express my heartfelt sympathy toward them.
Also, I believe there is an urgent need to rectify the current situation in which some are suffering from unfounded rumors about local farm and marine products, which have led certain neighboring countries to impose restrictions on imports from the area.

This Year’s First Task: Accelerating the Restart of NPPs
At the COP21 last December, Japan joined the framework of the Paris Agreement, which set a goal of reducing greenhouse gas emissions by 26% from their 2013 level.
One of the prerequisite conditions for that is nuclear power, which is expected to account for some 20 to 22% of total generated electricity in Japan in 2030.
However, although applications were made for 26 NPPs in the country to have examinations made of their compliance with new regulatory standards—a prerequisite for their restart—the reality is that only 5 have been examined so far, with just 4 resuming operations.
Furthermore, in order for Japan to meet the goal of reducing its carbon emissions—a promise the country has made to the world—it is essential to accelerate the process of restarting the country’s NPPs even further.
Particularly, regarding Japan’s boiling water reactors (BWRs), which make up roughly half of all NPPs in the country, not a single unit has cleared inspections for compliance with the new standards yet. For that reason, I believe that restarting BWRs will be the key to the revival of nuclear power in Japan.
Also, a provisional injunction has been imposed on Takahama Units 3 & 4, both of which had restarted earlier this year, thus shutting down their operation again. Besides building up a solid record of safe operation for plants that have been restarted, the industry must also prepare to make full explanations about safety, not only for the Japanese public, but also in the arena of the Japanese court system.
We would like to see the Japan’s Nuclear Regulation Authority (NRA) speed up its examinations of reactors based on its accumulated experience of earlier inspections. At the same time, it is important for the Japanese government to take the initiative in drawing up evacuation plans and getting understanding from the Japanese public, in order for those NPPs having passed the world’s strictest levels of regulations to be able to restart on a firm, solid basis.
Also, for Japan to continue to utilize a certain scale of nuclear power in the future, it will be necessary not only to restart reactors but also to review the current operational lifetime limit for reactors, set at 40 years in principle, as well as construct new NPPs.
Such discussions must begin without delay.

This Year’s Second Task: The Nuclear Fuel Cycle
Moving to the next topic, let me talk about the deregulation of Japan’s retail electricity market, which started on April 1 of this year.
Until recently, Japan’s electricity market had been divided into separate supply regions, with individual power companies monopolizing each, but now new operators are entering the market. The stepped-up competition will cause each to work harder and improve.
That means that operators will tend, inevitably, to come to see things from a more short-term perspective. Nevertheless, nuclear power is an enterprise where things take place over the long stretch, starting with the construction and operation of reactors and moving to decommissioning and spent fuel treatment and/or disposal.
Now that the retail electricity market has been deregulated, Japan must get its act together and develop a basic plan and well-planned policy for issues that need to be tackled strategically with a long-term perspective.
For nuclear power enterprises to be operated in a stable fashion in the future, the Rokkasho Reprocessing Plant must start operation and the nuclear fuel cycle completed, in which plutonium extracted from spent fuel will be used again as MOX (uranium-plutonium mixed oxide) fuel. Also, measures must be implemented to deal with high-level radioactive waste (HLW).
It will be especially crucial to demonstrate a highly-transparent plan to the world for utilizing plutonium, accomplishing plutonium separation and striking a usage balance through such actions as increasing the use of MOX fuel. 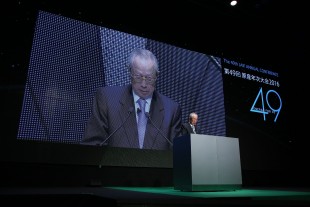 The issues of securing energy resources and global warming are gaining prominence in the world, owing to the increase in the global population and the economic development of emerging countries. After the Fukushima Daiichi accident, even, many countries are choosing nuclear power, with a view to the future.
Some 60 years ago, Japan, which lacks resources, adopted a policy of using nuclear energy, and since then has constructed NPPs continuously. Many people overseas have high expectations for Japan’s nuclear power technology and human resources, which have been developed over the years. It is also Japan’s mission to contribute to the world through that technology.
Additionally, for Japan to lead the world in the field of nuclear power as a technology-oriented nation, it is necessary to foster the next generation of human resources, at the same time that sophisticated technology is accumulated that will not lag behind the competition.
The way a country thinks about the future of energy, including nuclear, is tied to how it thinks about its own future in general.
I believe that the way to regain the trust of the Japanese people, now that we are trying to use nuclear power again after having made reflections on the Fukushima Daiichi accident, is to rediscover the value inherent to nuclear power as we contemplate the future of the nation.
In the world today, countries are carrying out a variety of energy policies. Germany has significantly boosted its dependence on renewable energy, having decided to phase out nuclear power altogether. Britain is constructing new NPPs, having implemented a system of guaranteeing strike prices. Meanwhile, the United States is maintaining nuclear power, with those states having deregulated their electricity markets coexisting with those that have not.
It will be highly useful to draw from those countries’ strategies and experiences, and use them as a guide, when Japan thinks of its own energy future.

The Theme Selected for This Year’s Conference
With those issues in the background, this year’s JAIF Annual Conference will treat the theme of “Energy for Us―Embracing Our Energy for a Better Future,” as it considers the direction that Japanese society should aim for as well as energy problems in general. Taking the conference as an opportunity to view things from the perspectives of global energy security and the problem of climate change, it will reconfirm the value of nuclear power and explore how to share it with the Japanese public.

About the Conference Sessions
Following the Opening Session is Session 1, entitled “The Energy the World Expects.” The session will discuss the experiences and strategies of various countries with their different energy policies.
Next, tomorrow’s Session 2, entitled “Future Japan and Energy Issues,” will aim to seek out the new value of nuclear energy as discussions deal with the desirable shape for society in the future.
Additionally, there will be another special session held later today, entitled “Hamadori Today, Leading the Way to the Future.” Invited industry representatives will share with you what is currently happening at Fukushima, with thoughts offered on what must be done to create a better future.

Closing
As I near the end of my remarks, I would like to take this opportunity to express my deep gratitude to all of you for attending the JAIF Annual Conference today, having come from near and far, and for taking time out of your busy schedules.
Together, I believe that the concerted efforts of the nuclear industry will allow us to tide over the current difficult circumstances.
That is the close of my remarks. Thank you for your kind attention.