Good morning. I am Takashi Imai, chairman of the Japan Atomic Industry Forum, Inc. (JAIF). Let me say a few words at the outset of this year's conference. As you know, this year we celebrate JAIF's 50th Annual Conference. The first one was held back in 1968. 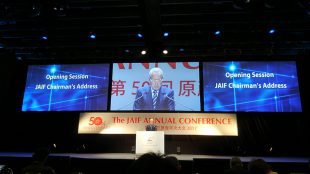 A look back at nuclear power in the past

At that time, in addition to the Tokai Nuclear Power Plant, which had started operation, Japan was planning to construct a large number of new NPPs, including three that had already begun to be constructed.

1968 was also the year in which the former Japan-US nuclear energy agreement was concluded.

Therefore, the keynote theme of the first Annual Conference was the problem of nuclear fuel, namely, how to secure uranium fuel as the demand for it increased, and how to utilize the plutonium contained in spent fuel.

As nuclear power generates large amounts of energy over a long period of time, using just a small amount of fuel, its fuel is easier to transport and keep in stock than that used in oil-fired power, which was regarded as the main power source back then. Also, using nuclear power can reduce the foreign currency burden. Furthermore, a country’s energy self-sufficiency will improve if spent fuel can be recycled.

For those reasons, looking at the records of the first JAIF Annual Conference, one can see how great the expectations were for nuclear power at that time to realize “the harmony between low cost and stability,” as called for by the energy policy of the time.

Since then, nuclear power in Japan expanded in conjunction with the country’s rapid growth, and continued to provide low-cost electricity in a stable fashion to support the Japanese economy over many years.

As you are all aware, Japan put together a “best mix” of energy after the experiences of the two oil crises of the 1970s, with nuclear power designated as a baseload energy source.

Immediately after the second oil crisis, in March 1979, the Three Mile Island accident occurred, after which the accident at Chernobyl happened in April 1986. Nuclear power has overcome both those accidents, though, and has accumulated a record of safe operation since then.

As a result, from the 2000s onwards, many countries took a fresh look at nuclear power because of the increase in global energy demand and environmental problems, with some even saying that there was a “nuclear renaissance.”

Then the accident occurred at the Fukushima Daiichi NPPs in March 2011.

After the accident, the debate about energy policies in Japan was thrown into confusion. While the Japanese government stated that nuclear power was “an important base-load power source” in its Strategic Energy Plan, it also decided to minimize the degree of the country’s dependence on nuclear power, reflecting calls by the public to abandon nuclear power.

In response to the accident, the operation of Japan’s NPPs was successively halted, and they were subject to inspections for conformity with new regulatory standards. In that process, all nuclear reactors in Japan stopped operating for 23 months. Even now, there are still only 5 plants that have been restarted.

From here on, will nuclear power in Japan just be allowed to decline, not to be needed anymore, and to be replaced with other types of energy? I think that such a thing should never be allowed happen.

Japan’s supply and demand for energy is still largely dependent on fossil fuels imported from overseas. The importance of nuclear power—a semi-domestic form of energy in terms of stable supply—has not changed in the least.

Also, regarding environmental issues, Japan has committed itself to a goal, pledged to the international community, of reducing its greenhouse gas emissions by 26% in 2030 from 2013 levels. While maximizing energy conservation and disseminating renewable energy, it will be impossible for us to achieve that goal unless a certain degree of nuclear power is utilized.

As described above, nuclear power is still a very important power source from the viewpoint of the “3E’s” of energy security, economy and environmental protection, all based on the premise of safety. It is thus something indispensable to our country.

Therefore, we in the domestic nuclear industry must overcome the current challenges by fully reflecting on the Fukushima Daiichi accident, allowing nuclear power to again be trusted by the public so as to help society.

The outlook for nuclear power’s future

NPP operators need to make safety their highest priority as they accumulate a steady record of operation for their restarted NPPs. At the same time, they need to talk with the public with a sense of transparency, so as to restore confidence in nuclear power.

Also, it is incumbent upon us to collect and utilize various technologies and wisdom when developing decommissioning measures for the Fukushima Daiichi NPPs—an activity which is capturing the world’s attention—and to strive to rebuild Fukushima.

In addition, it is also necessary for us to carefully respond to such problems as the nuclear fuel cycle, the disposal of high-level radioactive waste, the decommissioning of NPPs that have finished operation, and securing and fostering the human resources necessary for those activities, so as to steadily promote the nuclear power business.

Meanwhile, there are currently 439 NPPs in operation worldwide, with a total output of 406GWe, a figure that has set a new record for the second consecutive year.

At present, there are approximately seventy NPPs under construction in such countries as China, Russia, and India, with plans to build some one hundred more, including several in the UK and Turkey.

Countries with such NPP construction plans have pinned great expectations on Japan’s technology and knowledge, based on its experiences in constructing and operating plants so far, as well as the lessons learned from the accident at the Fukushima Daiichi NPPs, among others. I hope that those involved will respond to those expectations as much as possible.

For Japanese nuclear industry to overcome its present difficulties, it must concentrate its resources and unite more than ever, while working in cooperation with other countries. By promoting such cooperation and collaboration, JAIF will continue to support the development of the nuclear industry.

About this year’s annual conference

The theme selected for the 50th JAIF Annual Conference is “Bridging the Past and Present Toward the Future.”

As in previous years, this year’s conference features several prominent speakers from Japan and abroad.

After the Opening Session, Session 1 —entitled “Roles of Nuclear Energy ‒ Past, Present and Future”—will reflect on climate change problems and other issues faced by the world. Discussions will incorporate various perspectives on such issues as the role that nuclear energy can play, as well as the importance of Japan-US coordination, with experts from both Japan and the United States airing their opinions.

This afternoon, in Session 2 —entitled “State of Fukushima and Efforts Toward Restoration”—we will hear reports about the current situation of recovery efforts in the field at Fukushima, after which I hope that all of you, both those from Japan and overseas, will give your suggestions on the role that the nuclear industry ought to play in the reconstruction of the area.

In tomorrow’s Session 3 —entitled “Global Trends and Expectations of Japan”—we will learn about experiences and prospects for the industry overseas, particularly the current situation and prospects for those countries newly introducing nuclear power for the first time. I also look forward to receiving your suggestions and expectations for Japan.

Also, after those three sessions, a special session will be held entitled “View from the Next Generation: Sharing Visions for Nuclear Energy,” with young people from Japan and abroad—who will be responsible for the future—will speak about their outlook for nuclear power in the coming years and their dreams for a future that utilizes nuclear power.

Finally, let me take this opportunity to express my deep gratitude to those people who have traveled from near and afar to speak at the JAIF annual conference this year despite their busy schedule.

Thank you for your kind attention.