A research team at the Kindai University Medical Department announced that it has developed, jointly with Hayakawa Rubber Co., Ltd.—a company famous for its radiation-resistant rubber—a radiation-shielding material known as “sealer soft tungsten rubber,” or STR. The material (photo from Kindai University’s website) can be softened and shaped in water of 60 degrees C, allowing it to maintain its form at normal temperatures. 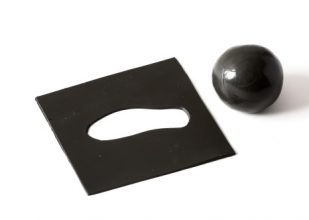 Hayakawa Rubber met many technological challenges, including earthquake resistance, in its development of rubber construction materials for the Japan Proton Accelerator Research Center (J-PARC) in Tokai Village, Ibaraki Prefecture, in which it was able to maintain the elasticity of the rubber in highly radioactive environments.

The recently-developed STR incorporates the firm’s special blending technology in a product offering both excellent flexibility and processability. As a shielding material replacing conventional toxic lead and antimony, it is expected to contribute to reducing side effects and improving accuracy in radiation therapy. STR itself can also be reused.

Now celebrating its centennial, Hayakawa Rubber has long been dedicated to reducing the burden on the environment, including recycling rubber of retread tires since before the war.

According to the announcement by Kindai University, electron beams can be used in medical irradiation using STR shields placed directly on the skin. Improved accuracy can be expected not only of small targets, but also in situations where the target location shifts significantly as a result of breathing.

Additionally, the ease and speed of forming specific shielding can minimize keloidal scarring by allowing irradiation of wounds immediately after surgery.