Looking Forward to Technological and Personnel Development to Support Future Reactor Decommissioning: Ways to Get the Younger Generation Interested

Work is currently progressing toward the decommissioning of the Fukushima Daiichi Nuclear Power Plants of the Tokyo Electric Power Co. (TEPCO). However, given that such work is expected to take some three or four decades, it is crucial to develop human resources and new technologies over the medium and long range so as to pursue it steadily. For that to happen, it is essential first to get members of the younger generation to become interested in the current situation at Fukushima Daiichi as well as its decommissioning. Two welcome developments have occurred recently in that regard.

The first was the holding on December 3 of the first annual “Hairo Sozo” (Reactor Decommissioning Creativity) Robot Contest for technical college students nationwide, held at the Naraha Remote Technology Development Center (Fukushima Prefecture), which just started full-scale operations during the current fiscal year for the purpose of developing the technological foundation necessary for reactor decommissioning. The contest involved teams pitting their remotely-controlled robots against each other in performing appointed tasks at the contest site, which replicated actual conditions at Fukushima Daiichi, keeping the decommissioning work at that facility in mind. The idea was to have the teams compete with another in terms of their ideas and technology. Some fifteen teams from thirteen technical colleges around Japan took part, with the local Fukushima Technical College playing a central role. 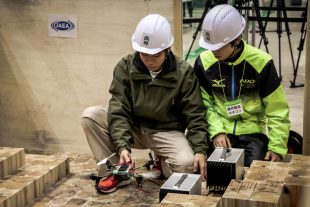 The main purpose of the contest was said to be to get students interested in decommissioning through the creation of robots. Moreover, the fact that it targeted members of the younger generation was epoch-making in itself, and I applaud the parties associated with the event for having done so.

Since the contest was carried out under the supposition of the harsh conditions inside the reactor buildings at Fukushima Daiichi, many of the teams experienced difficulties in accomplishing the tasks assigned to them. While that meant that the participants were forced once again to realize how hard it is to create robots in actuality, making things and developing new technologies were never easy to begin with. It is important first to adopt a stance of taking on such difficult tasks resolutely while developing a stronger interest in reactor decommissioning.

It has already been decided to hold the robot contest next year, with the same tasks being assigned. I sincerely hope that each of the schools’ teams will build on this year’s experiences, with graduating team members passing on their aspirations to their successors as they attempt to take on the same challenges again, utilizing new, creative ideas unfettered by preconceived ideas. It is a privilege of being young to be able to do that. 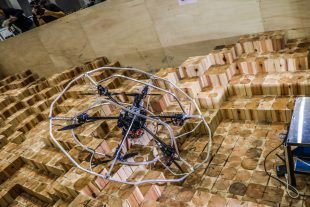 As the best ideas and technologies will be considered for actual application on site, I look forward to the robot contests in coming years serving as a venue for superior ideas to emerge, leading to the eventual development of the innovative technologies that will actually be applied in reactor decommissioning in the future.

The second development that I found encouraging was the implementation in November of a visit to the Fukushima Daiichi site—the first by high school students since the March 2011 accident—by students enrolled in the Fukushima Prefectural High School. Ever since the accident, the school has been carrying out its own efforts to understand the situation, such as measuring radiation doses on campus and releasing the results through exchange activities with a French high school. The latest visit was materialized after the students themselves strongly voiced their desire to go there.

Currently, the environment of most areas within the Fukushima Daiichi site is being steadily improved, making it possible to get around without protective gear or masks. Still, unfortunately, that reality has been neither broadly nor accurately conveyed to society as a whole. I really had to respect the way that the high school students took an interest in the ongoings at the site, checking out what was happening for themselves, and then relaying what they had found out to the larger society, both in Japan and abroad. Thanks to the latest visit, TEPCO, which had forbidden onsite visits by people under the age of eighteen since the accident owing to internal restrictions, has now demonstrated its intention to actively allow such visits by members of the younger generation. I hope that this will mark the beginning of similar visits by a greater number of young people to the Fukushima Daiichi site, so as to increase the opportunities for a deepened understanding.

While the decommissioning of Fukushima Daiichi tends to be cast in a negative light, it simultaneously represents an effort—perhaps unprecedented in the history of humankind as well—to bring together and consolidate the wisdom and knowledge of the whole world to address the task at hand, making it a subject of people’s dreams and a challenge worth pursuing. The fact that a lot of young people have taken an interest in the current situation at Fukushima Daiichi as well as in its decommissioning, along with the slated continuation of such activities as the aforementioned robot contest, make me look forward to their future contributions toward the development of technology and the fostering of human resources to support the steady progress of the decommissioning work.