On October 7, the first meeting of the Conference on Fast Reactor Development was held at an office of the Ministry of Economy, Trade and Industry (METI) in Tokyo. With both the public and private sectors participating, the conference will address the basic policy on fast reactor development, as well as specific activities. 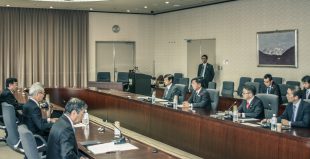 The decision to establish the conference was made on September 21 at a ministerial meeting comprising Japan’s cabinet and other ministerial officials responsible for nuclear energy. The decision was made in light of recent changes in circumstances surrounding fast reactor development in Japan, including the March 2011 accident at the Fukushima Daiichi Nuclear Power Plants and electricity system reform, with deregulation of the retail market starting in April 2016.

The September 21 ministerial meeting endorsed the view that Japan should hold fast in promoting the nuclear fuel cycle while carrying out fast reactor R&D, as part of the national government’s strategic energy plan. As for the prototype fast breeder reactor (FBR) Monju, the government is to determine and present an official policy on how to deal with it, which may result in the reactor’s decommissioning.

METI Minister Seko began the conference meeting by reiterating the Japanese government’s recognition that nuclear energy is essential for Japan, which lacks energy resources, to maintain stable supplies of inexpensive electricity, stressing that the country must face the challenges of the nuclear fuel cycle squarely. That set a clear tone for deliberations, with an eye on realizing the fast reactor cycle in the future.

As the head of the Japanese ministry with direct authority over R&D on fast reactors, MEXT Minister Matsuno expressed awareness at the meeting of a particular issue: namely, how Monju and Joyo can contribute to realizing a specific course of action toward a demonstration reactor.

At the meeting, FEPC Chairman Katsuno emphasized the importance of the nuclear fuel cycle, saying that, along with promoting the use of MOX fuel in light water reactors (LWRs), ensuing fast reactor development should be carried out consistently and without disruption.

Meanwhile, MHI President Miyanaga commented at the meeting that the nuclear fuel cycle represented “critical national technology” to which Japan must remain committed. He expressed high expectations for fast reactor commercialization. His company was selected in 2007 as the core engineering company for fast breeder reactor (FBR) development.

The first meeting also reviewed the significance of fast reactor development, international trends, and events and lessons learned up to now, with MEXT representatives presenting cost estimates for Monju through to the end of its operation.

Monju operators are currently barred from taking steps toward resuming operation of the reactor under a directive from the Nuclear Regulation Authority (NRA). Assuming that it would take eight years to restart the reactor, and that it could then be operated for another eight years, the total costs (minus those for decommissioning) are estimated at JPY540 billion (USD5.24 billion at USD1=JPY103) at minimum.

Afterwards, METI Minister Seko commented, “The meeting allowed me to reconfirm the importance of carrying out fast reactor development. the Japanese government wants to present a clear course of action from the viewpoint of ensuring human resources as well.”