On May 19, the All Japan Council of Local Governments with Atomic Power Stations held a general meeting in Tokyo to decide its FY16 activity plan, including a request that the national government and various organizations make constant efforts to reconstruct the area affected by the March 2001 Fukushima Daiichi nuclear accident, as well as to improve the effectiveness of nuclear safety regulations and measures to prevent disasters. Fuchikami was reelected chairman of the council. 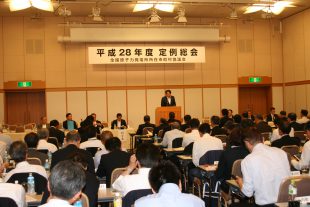 In his opening message, Mayor Takanobu Fuchikami of Tsuruga City, who was reelected chairman of the council, expressed concern over new issues arising from the prolonged period of people living as evacuees, now that five years have elapsed since the Fukushima Daiichi accident. He stressed the need to keep carrying the message of the affected people and areas so as to promote the restart of nuclear power plants that meet the new regulatory standards. He also said it was necessary to steadily accumulate a record of safe operation toward the realization of the official long-term energy supply-demand outlook issued last summer.

He went on to ask the national government to enhance measures to support siting areas following decommissioning, saying that the siting areas are themselves working wholeheartedly toward “reliable safety” on a daily basis. He said that he hoped there would be wider recognition of the extent to which siting areas are cooperating with national policy.

The meeting also included exchanges of views with national government officials. In response to a written request on nuclear emergency preparedness submitted to the government by the council, Toru Shiraishi, parliamentary vice-minister of the cabinet office (responsible for nuclear emergency preparedness), referred to improving the capabilities of those engaged in the field. He said that the national government would “work on the matter, including developing and improving training facilities,” thus demonstrating his attitude in favor of their enhancement and reinforcement.

In addition, when asked by someone from Futaba Town, Fukushima Prefecture, about what the government would do to deal with areas where residents will not be able to return home for a long time, Shiraishi said that a policy direction would be clarified sometime this summer.

Meanwhile, people from the siting areas expressed their concern about the tightening situation for spent fuel storage, owing to delays at the Rokkasho Reprocessing Plant. They questioned the significance of the new regulatory standards if, as has been seen, courts can prohibit NPP restarts nonetheless.