At a press conference held after a cabinet meeting on August 25, Hiroshi Kajiyama, head of Japan’s Ministry of Economy, Trade and Industry (METI), addressed a report that Suttsu Town in Hokkaido has been considering accepting a series of investigations toward being selected as a high-level radioactive waste (HLW) disposal site. 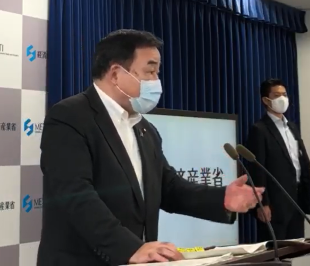 He reiterated his recognition that final disposal of HLW was an important issue that our generation—the one that has enjoyed the benefits of nuclear power—must be responsible for resolving.

Final disposal of HLW refers to burial of the waste more than 300m below ground. Systematic, certain realization is the aim of the Nuclear Waste Management Organization of Japan (NUMO), which was formed to be the responsible body, based on the Designated Radioactive Waste Final Disposal Act of 2000. In 2002, NUMO began publicly inviting municipalities to accept investigations. Toyo Town in Kochi Prefecture had applied in 2007, but later withdrew its application.

Investigations under the law are categorized in three stages: (1) literature survey (about two years), (2) preliminary investigation (about four years), and (3) detailed investigation (about fourteen years). At the end of each stage, results are to be released, with the opinions of the prefectural governor and head of the relevant municipality to be heard again, before going on to the next stage. If there are any objections to going further, though, the process is to be suspended.

In a literature survey—the first stage—materials subject to consideration, including specific literature and data on the area and region, are gathered or presented, and a form of dialogue takes place among the parties concerned. Given that there are voices of concern about bringing in radioactive waste, METI Minister Kajiyama emphasized that the government would proactively provide information and explanations to the area and region on their significance, among other matters.

Meanwhile, since Hokkaido Governor Naomichi Suzuki had expressed concern about proceeding with the investigations at Suttsu Town, Chief Cabinet Secretary Yoshihide Suga voiced his understanding—at a press conference on August 24—of the issues in HLW disposal, saying that the government would like to hear the governor’s opinion “at an appropriate time.”