MEXT Minister Shares His Hopes with the Press, Seeking to Secure Human Resources Together with Universities

On September 25, Koichi Hagiuda, head of Japan’s Ministry of Education, Culture, Sports, Science and Technology (MEXT)—who joined the Cabinet for the first time in Prime Minister Abe’s September 11 reshuffle—held a press conference, at which he expressed his hopes and expectations (photo). 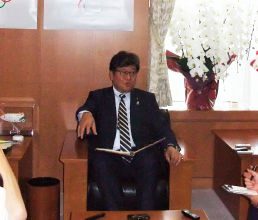 Asked about the development of nuclear-energy human resources within the context of national science and technology policy, he first referred to the positioning of nuclear energy in Japan’s fifth Strategic Energy Plan, saying, “Nuclear power is an important base-load power source . . . contributing to the stability of the energy supply-demand structure in the long term, on the major premise of ensuring of its safety.”

Hagiuda then demonstrated his attitude of wanting to strive to ensure nuclear human resources, saying, “Japan can consider safer uses of nuclear energy all the more because of the nuclear accident that occurred here.” To combat young people’s loss of interest in studying nuclear energy, he added that the country wanted to work with people engaged in the field of education on the matter.

The minister was next asked about large-scale international cooperative projects, and whether Japan might become the site of the International Linear Collider (ILC), a linear accelerator. In his response, he mentioned that while he recognized the need for the project itself, the huge costs of constructing such a facility made it almost impossible for a single country to deal with it. Hagiuda indicated that the Japanese government would continue talking with related organizations about the project, though, including seeking a partner country to secure funds appropriately.

Concerning ways to spur innovation, the minister said that Japan would focus on creating mechanisms to ensure that the fruits of R&D were “returned” to society. “It would be interesting,” he said, “to ‘dig up’ R&D results that have yet to be developed,” and see—in cooperation with the private sector—where they might lead. He also emphasized his intention to promote cooperation among industry, academia, and government.

Hagiuda then referred to various examples of unexpected fruits of development from the field of space science, such as the common GPS system used by millions every day, household-use insulation materials developed for rockets, and zero-gravity space toilets that might be applied to elderly care.

He also stressed the importance of educating practical-oriented engineers at Japan’s Kosen (national institutes of technology, or NITs), which are unique institutions of higher education providing students with five years of engineering education from the age of 15. He stressed that they can serve as a foundation for Japanese monozukuri—craftsmanship and technology—in the manufacturing industry.