At the Vienna International Center (VIC), where the 63rd International Atomic Energy Agency (IAEA) General Conference is being held from September 16 to 20, the Japan Atomic Industrial Forum, Inc. (JAIF) maintained the Japan Booth together with the Japanese government and private companies and organizations, showcasing Japan's peaceful uses of nuclear energy. 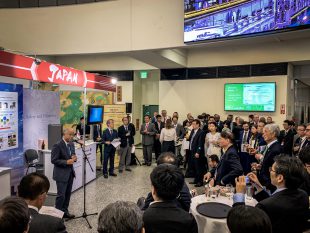 Some one hundred persons attended the opening ceremony at the booth, which was held on the first day of the conference. Among them was Minister of State Naokazu Takemoto for Science and Technology Policy, one of the Japanese representatives.

In his opening remarks, Takemoto focused on the great potential of nuclear technology to enrich people’s lives, not merely through nuclear power, but also in such matters as food production, medicine, and environmental protection.

The minister referred to the exhibits at the booth, which treated such themes as cancer therapy apparatus using heavy particle irradiation, the state of decommissioning at the Fukushima Daiichi Nuclear Power Plants (NPPs), and the reconstruction of Fukushima Prefecture in the eight and a half years since the 2011 accident, including videos.

Takemoto then praised the achievements of the late IAEA Director General Yukiya Amano, saying that Japan must demonstrate superior examples of peaceful use to the world.

Next to speak at the opening ceremony was JAIF President Akio Takahashi, who first welcomed those present, then offered a toast to the success of the exhibition. Visitors to the booth were treated to Japanese sake produced in the Hamadori region of Fukushima Prefecture. Approximately 280 people visited the booth on the first day.

Under the theme of “Life, Safety and Prosperity,” the exhibits included panel displays on the NEXIP Project, policy efforts to promote nuclear innovation, videos on the state of decommissioning and reconstruction of Fukushima, models of fuel for high temperature gas-cooled reactors (HTRs), and a quantum scalpel.

Using panels, videos, information about Japan’s nuclear policies, the current state of applications of nuclear R&D, progress in Fukushima Daiichi decommissioning and more was presented to government officials, specialists, experts, IAEA personnel, and people from all over the world.

Please visit the special website below for information on the handouts and videos shown by individual participating organizations.