On February 5, Japan's National Agriculture and Food Research Organization (NARO) announced its joint development with the firm Clear-Pulse of a device to detect gamma rays from radioactive materials in farmland and surrounding areas from a distance. It can also convert the data into one-year radiation dose rates in the air. 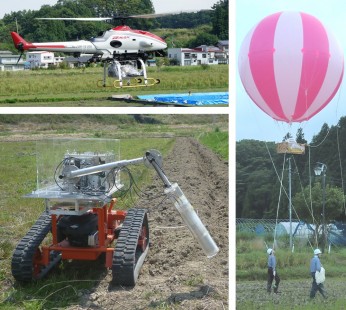 The device will enable people engaged in decontamination to understand – both quickly and easily – the distribution of radioactive materials before and after they conduct the decontamination work.

The device is more sensitive than conventional portable air-dose radiation meters, and can produce measurements in a short time. It can also be linked to a GPS positioning system.

Moreover, it can be mounted on a radio-controlled vehicle, air balloon, unmanned helicopter (drone), or the like. When operated, it can continually make measurements so as to ascertain the distribution of radioactive materials throughout the area being investigated.

With the device’s ability to convert measured values into radiation dose rates in the air, even non-specialists can use it to obtain measurements easily.

Large-scale decontamination has become necessary in Japan give the widespread dispersal of radioactive materials after the tsunami-triggered accident at the Fukushima Daiichi Nuclear Power Station in March 2011. In that effort, it is important for the workers involved to accurately understand the distribution of radioactivity both before and after the decontamination takes place.

Measuring radiation dose rates in the air is an easy way to confirm the results of decontamination work at the site. Since conventional portable air-dose meters require about one minute to make a measurement at each spot, it is time-consuming to cover the many spots that need to be measured in large-scale decontamination work. New technology was thus needed for more efficient measurements.

NARO’s new device is also expected to be useful in determining the effectiveness of farmland decontamination projects and in generally evaluating new decontamination technology.

The ability to make remote measurements should also be useful in letting people take radiation dose rates in the air in places where they cannot (or should not) enter, such as where radiation levels are high and in agricultural reservoirs.

The new device will be marketed by Clear-Pulse.