On December 1, a meeting was held in Tokyo of Japan's National Nuclear Union, which is engaged in activities to obtain public understanding toward the restoration of confidence in nuclear power, and in making related political proposals. 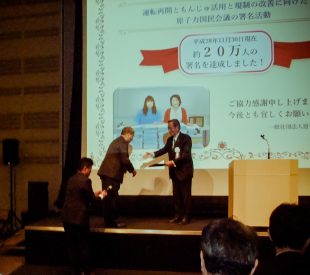 At the meeting, the union adopted a statement calling for the promotion of the restart of Japan’s nuclear power plants (NPPs), as well as the establishment of the nuclear fuel cycle and reform of nuclear regulatory administration.

On December 4, 2014, the National Nuclear Union had similarly released a statement, and subsequently carried out a campaign to collect signatures in support of it. As of the end of November, it had collected 200,000 names.

That situation was described to Hiroyuki Hosoda—a guest at the recent meeting and a member of the House of Representatives, as well as chair of the Executive Council of the Liberal Democratic Party (LDP)—as a call for the government to realize nuclear and energy policy.

At the start of the meeting, Akito Arima, former minister of the Ministry of Education, Culture, Sports, Science and Technology (MEXT), and the union’s co-leader, emphasized the importance of securing stable supplies of inexpensive electric power in light of Japan’s low level of energy self-sufficiency, which is causing the outflow of national wealth on account of the purchase of fossil fuels. He also stressed the need to reduce CO2 emissions, emphasizing that “Japan needs nuclear power.”

LDP’s Hosoda responded by expressing concern for the slow pace of restarting NPPs, saying, “For the moment, there is no other choice for Japan but to depend on nuclear-fission energy.” He urged nuclear experts “not to be fearful but to have courage.” That indicated his endorsement of the union’s activities for public understanding.

Another guest at the December 1 meeting, Hirofumi Takinami (LDP, House of Councillors), then gave a presentation. Noting some problems in nuclear regulatory administration, including prolonged examinations by the Nuclear Regulation Authority (NRA) and questions about evaluations of active faults within NPP premises, he said that he was preparing a bill to revise the Law for the Regulation of Nuclear Source Material, Nuclear Fuel Material and Reactors (the Reactor Regulation Law) to be submitted at the next ordinary Diet session.

As he comes from Fukui Prefecture, the site of several nuclear facilities, Takinami appealed for trust between electricity-producing and electricity-consuming areas, saying that consuming areas should express their gratitude to the producing areas for understanding the risks involved and providing electricity. 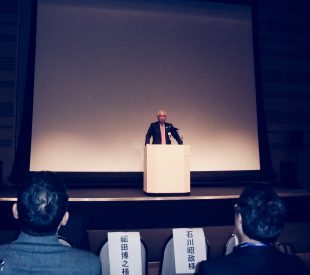 The National Nuclear Union works enthusiastically to promote dialogue with people in local areas. At the meeting, Mayor Hiroo Shinada of Kariwa Village (Niigata Prefecture), representing such communities, talked about the issues that NPP-hosting regions face. He chided the media for simplistically connecting local support for NPP restarts with the revitalization of local economies, saying, “Residents have studied very hard about energy issues, which are part of national policy. We understand the importance for everyone.”

Also voicing his opinion was Vice Chairman Junji Ishiguro of the Fukui Council for Nuclear Peaceful Use, who stated his worries about the adverse effects on morale at the site and on human resource development from the way that the fast breeder reactor (FBR) Monju is being dealt with.

Another participant, Prof. Emeritus Yoichi Suenaga of Aomori University, talked about the stalled construction of the Rokkasho Reprocessing Plant and the Ohma NPP (ABWR, 1383MWe), both located in Aomori Prefecture.

A statement was also read on behalf of Mayor Takaaki Kotani of Oarai Town (home of the experimental reactor “Joyo”), Ibaraki Prefecture, who pointed out that no progress is being made to restart research reactors.