On October 26, Japan’s Prime Minister Yoshihide Suga, at the opening of an extraordinary Diet session, delivered his first policy address. 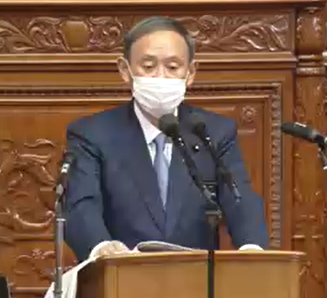 The prime minister—having just taken office one month earlier, in September—began by saying, “I have taken on the heavy responsibility of steering the nation in the middle of the coronavirus pandemic and an economic slump that is the worst since World War II.” He expressed his sympathies over the deaths of Covid-19 victims and demonstrated his respect and gratitude to medical personnel for their efforts.

The prime minister also showed his determination to strengthen the testing system, ensure the appropriate distribution of medical resources, and work on further measures toward economic revitalization, in continuation of the policies of the preceding Abe administration.

Concerning measures to deal with climate change, Suga reiterated that a “virtuous cycle of economy and environment” had been positioned as a pillar of the nation’s growth strategy, and clearly stated that Japan would aim to realize a carbon-free society by achieving net zero greenhouse gas emissions by 2050. He continued by saying, “Responding to global warming will not restrict economic growth. Acting affirmatively will spark reforms and adjustments within industrial structures, the economy and society, resulting in substantial growth.”

The prime minister also emphasized the need for Japan to “change its way of thinking,” saying that the government would make “unified efforts,” including those to accelerate R&D toward applying innovative technologies in the energy and environmental areas, such as next-generation solar cells and carbon recycling, accompanied by regulatory reform and national government cooperation with local regions.

On energy policy, Suga said that a stable energy supply would be secured through thorough conserving energy, introducing renewable energy to the maximum extent, and carrying out nuclear policy with the highest priority placed on safety.

Turning to the reconstruction of Fukushima, the site of a nuclear accident nine and a half years ago, the prime minister looked back on his visit to the Futaba Future School in September, noting the enthusiasm of the students there to help in the reconstruction efforts. He also said that had listened to their work to fight against unfounded fears and rumors. He mentioned that he felt that young people growing up were ready to energize the future and launch themselves into the world.

Suga also said that his determination was unshaken, adding that all the areas whose residents officially cannot return home for a long time will see those restrictions lifted in the future, “no matter how long it takes,” and that he would continue working on the issue even more vigorously.