The Nippon Foundation of Japan has released the results of a survey conducted in January 2021 of 1,000 men and women around the country aged 17 and 18. Since 2018, after the voting age was lowered from 20 to 18, the foundation has surveyed young people several times a year on various societal issues. 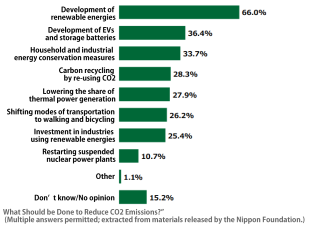 When asked about the causes of global warming, 66.7 percent of the respondents cited greenhouse gas emissions associated with human activity as the main cause, while 77.4 percent said that they were aware of the risks (e.g., abnormally high temperatures and severe storms), and 73.0 percent believe that Japan should reduce its CO2 emissions. Those percentages are higher than comparable responses in a 2019 survey on climate change.

Two-thirds of the respondents—66.0 percent—referred to the development of renewable energy sources as their desired focus of efforts to reduce CO2 emissions, far more than those who noted the development of EVs and storage batteries (36.4 percent) and the promotion of household and industrial energy conservation (33.7 percent). Lowering the ratio of thermal power generation was selected by 27.9 percent, and restarting suspended nuclear power plants by just 10.7 percent (multiple answers permitted).

Among renewable energies, the most positive expectations of the respondents were focused on solar power at 69.1 percent, followed by hydropower at 39.9 percent, biomass at 34.9 percent, and geothermal at 30.7 percent (multiple answers permitted). In response to an open-ended question on how Japanese energy policy should be changed toward achieving a carbon-free society, one person said that installation of solar panels should be required for each household.

Thirty-two respondents were supportive of the use of nuclear power or accepting of its current state, premised variously on ensured safety, dispersed sources, pursuit of nuclear fusion, and fresh discussions on stabilization of power supply and demand. On the other hand, twenty-five respondents were negative on nuclear use, including reducing its current share.

Also suggested were research on energy systems harnessing the pressure of driving bicycles, and of thunder, as well as efforts to promote changes in public awareness, investment in R&D, and human resource development.

Following the release of the results, Chairman Yohei Sasakawa wrote the following on his March 11 blog: “It is difficult to imagine the global environment three decades from now, but maximum efforts by people of all ages are essential if we are to hand a healthy planet to future generations.”