On October 27, Japan’s Nuclear Regulation Authority (NRA) held an extraordinary meeting to talk with President Makoto Yagi and other executives of the Kansai Electric Power Co. (Kansai EP). The meeting focused on the approaching end of the 40-year operating lifetime on November 30, 2016, for the power utility’s Mihama-3 Nuclear Power Plant (PWR, 826MWe), for which the NRA is now performing a compatibility examination.

According to the NRA, Kansai EP had originally filed applications on March 17 of this year for permission to change a reactor installation and revise the operational safety program involving the aforementioned examination. Regarding the work plan, however, the power company said that it would not file its application until November because it takes time to prepare “explanations of seismic evaluations reflecting the latest knowledge.”

However, the NRA has said that it cannot determine whether the required examinations can be completed before the reactor reaches its lifetime limit next year. No application to extend Mihama-3’s service life has yet been submitted by Kansai EP, although the legal period for filing is from September 1 to December 1.

In addition, the NRA has considered it necessary to discuss how to proceed examinations, given the fact that Kansai EP’s Takahama-1 and -2 NPPs, and Ohi-3 and -4 NPPs are undergoing the same examinations, as well as the expiration of Mihama-3’s service period, and the status of examinations of other plants. That is why it called the meeting with Kansai EP management.

At the meeting, President Yagi and other executives presented their schedule for submitting materials for Mihama-3’s examination, explaining why the process was taking so long. Yagi said that the power utility has been striving to respond systematically to the requirements of the examination, including assigning additional personnel from departments outside nuclear energy.

In response to that, NRA Commissioner Toyoshi Fuketa, in charge of plant-related examinations, said that he was “not sure” that the examination could be completed “even if we started working on it full-time right now,” demonstrating his strong sense of crisis. When he suggested that the operator should determine which plants the NRA should examine with priority due to inspection personnel shortages, the Kansai EP executives said that the company would do its utmost to promptly submit the appropriate materials, asking the NRA to conduct examinations “in a well-balanced manner.”

NRA Chairman Shunichi Tanaka agreed to carry out the examinations that way, as well as efficiently, showing his understanding of the operator’s request, while clearly stating that there should be no conjecture about the examinations. 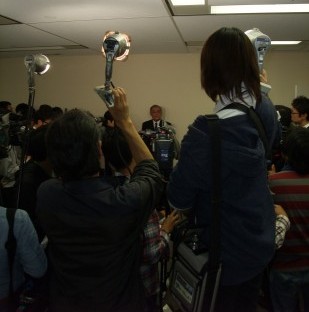 Talking to a group of reporters after the meeting, the Kansai EP President emphasized the mission of power companies to provide a stable supply of electricity, reduce power rates and help revitalize regional economies. He added that his firm would try to get all the plants now being examined by the NRA restarted early, deeming each of them as “important to doing business.”

Meanwhile, in his capacity as chairman of the Federation of Electric Power Companies (FEPC), Yagi also spoke about the NRA’s examinations of plants for which various power companies have already filed applications. He said that he had asked the Agency to make the examinations more efficient based on its experience at previous plants, including the Sendai NPPs of the Kyushu Electric Power Co. He also that he had asked each company to respond earnestly to the examinations.