At a regular meeting on December 11, the Nuclear Regulation Authority of Japan (NRA) approved decommissioning plans for the Ohi-1 and -2 Nuclear Power Plants (NPPs, PWRs, 1,175MW each), owned and operated by the Kansai Electric Power Co. (Kansai EP). 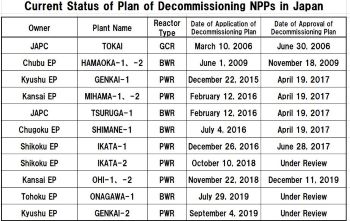 Having accepted applications from the power utility in November 2018, the NRA decided to open its examinations of the decommissioning plans to the public from the viewpoint of ensuring transparency, just as it does for compatibility examinations under the new regulatory standards.

It has already carried out five public examinations since December 2018, asking the operator for explanations. Among other things, the NRA found that internal standards, systems and the like are sufficient to ensure that decommissioning work would not affect Units 3 and 4, which are still in service.

Decommissioning of both Units 1 and 2—to be carried out in parallel—will be divided into four stages, as follows:

(1) Preparing for the units’ dismantling.

(2) Dismantling and removing facilities and equipment in the area surrounding the reactors.

(3) Dismantling and removing the reactors themselves.

(4) Dismantling and removing the reactor buildings and other structures.

This time, the NRA approved the examinations for the first stage of the entire process, for which Kansai EP had filed its applications.