At a regular meeting on March 17, the Nuclear Regulation Authority of Japan (NRA) approved a draft review report on the Dry Spent Fuel Storage Facility at the Genkai Nuclear Power Plants, owned by the Kyushu Electric Power Co.. 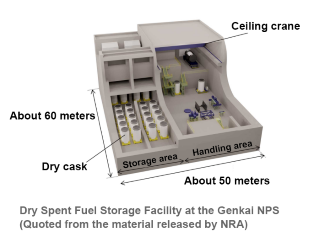 The report concludes that the facility is compatible with Japan’s new regulatory standards for installations. It will be finalized after being referred to the Japan Atomic Energy Commission and the Ministry of Economy, Trade and Industry (METI), and has been made open to the public for comments.

In January 2019, Kyushu Electric had filed applications with the NRA for permission to re-rack at the current facility—increasing storage capacity by about 50 percent by increasing the density of the racks as well, through the use of improved rack material in the spent fuel pool—and to construct a dry storage facility to improve overall spent fuel storage capabilities.

In March 2020, the power utility had already obtained approvals to change the reactor installation, for the re-racking, and of its work plan.

According to a report on the status of spent fuel storage measures, released in July 2020 by the Federation of Electric Power Companies of Japan (FEPC), the current manageable storage capacity in the spent fuel pool at the Genkai NPS is 1,190 tons, while 1,010 tons were actually stored as of March 2020.

Kyushu Electric aims to start operation of the dry storage facility—the facility just approved in the NRA’s draft review report—in FY27 (ending on March 31, 2028). Combined with the re-racking in the pool, the resulting storage capacity at the Genkai NPS will be increased by 730 tons.