At a meeting on June 3, the Nuclear Regulation Authority of Japan (NRA) finalized a review report for the High-Temperature Engineering Test Reactor (HTTR), owned by the Japan Atomic Energy Agency (JAEA), saying that it was compatible with the new regulatory standards. The reactor, with a thermal output of 30MW, is situated in Oarai Town, Ibaraki Prefecture. The NRA then issued the Agency its approval to make changes to the reactor installation (basic design approval). 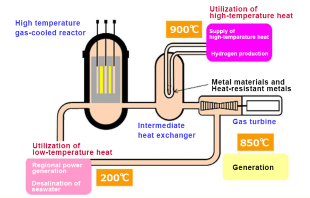 Earlier this year, on March 25, the NRA had issued a draft review report—which was also given to the Japan Atomic Energy Commission (JAEC) and the head of the Ministry of Education, Culture, Sports, Science and Technology (MEXT)—and made it open to the public for comments. It has been five and a half years since JAEA initially filed an application for an examination in November 2014.

The HTTR is smaller than light water reactors (LWRs), which typically have electric outputs in the range of 1,000MW, but its outlet temperature of 850℃ to 950℃ at design thermal output—compared with just 300℃ for LWRs—is expected to be used for a broad range of purposes, including hydrogen production, the desalination of seawater, and regional power generation. 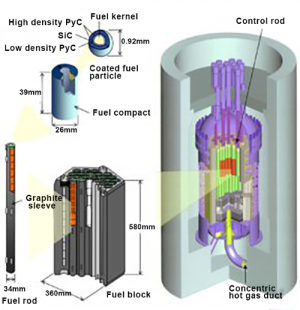 Moreover, through its use of chemically stable helium as coolant, the HTTR is extremely safe at high temperatures, in the structure of its ceramic-cladded fuel (effective at confining radioactive substances at temperatures up to 1,600℃), and in other respects.

JAEA will continue with work on safety measures so as to resume operation of the HTTR by the end of the current fiscal year (i.e., by March 31, 2021). Immediately after the restart of the HTTR, the Agency will complete the Loss of Forced Coolant (LOFC) Project, a series of safety verification tests within the OECD/NEA framework.

The basic safety characteristics of the HTTR, including scramming, cooling, etc., had been recognized in the first phase of the tests (at 30-percent output, tripping the helium gas circulators), which ended in FY10. Further tests will involve more extreme conditions. Ultimately, the results will contribute to the international standardization of safety for high-temperature gas-cooled reactors (HTGCRs).