At a regular meeting on May 13, the Nuclear Regulation Authority of Japan (NRA) issued a draft review report for the Rokkasho Reprocessing Plant, owned by Japan Nuclear Fuel Ltd. (JNFL), saying that the facility was compatible with the new regulatory standards. The report will be finalized after it is referred to the Japan Atomic Energy Commission (JAEC) and the Ministry of Economy, Trade and Industry (METI), and made open to the public for comments. 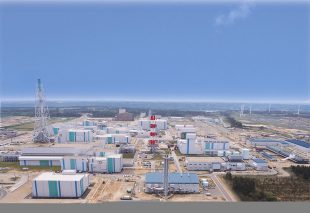 Inasmuch as this is the first time that the NRA has made a decision about the operation of a reprocessing plant, the NRA will ask the METI minister to comment on consistency with the fifth Strategic Energy Plan.

JNFL had filed an application with the NRA for an examination of the Rokkasho Reprocessing Plant in January 2014, but the NRA took more than six years to finalize a draft review report.

In February 2019, five years after the original filing of the application, the NRA identified points of interest. The following month, it compiled materials for discussions focusing on examination policy in the matter of responses to specific severe accidents, toward the issuance of a draft review report. While considering amendments to the application submitted by JNFL, the NRA worked out details on remaining issues, including aircraft strikes.

Regarding the Detoseiho Active Fault—which traverses 11km from the plant, and is deemed significant in evaluations of ground motion—the NRA, in the draft, confirmed the appropriateness of JNFL’s investigative results and evaluations.

Measures were also checked aimed at preventing damage due to the leakage of chemical agents particular to a reprocessing plant, among others.

At a press conference after the May 13 meeting, NRA Chairman Toyoshi Fuketa explained why the examination had taken so much time, citing such factors as a certain period when the examination was suspended “due to issues of quality control,” as well as the reorganization of the examination system. He also said that there had been in-depth discussions in the final stage, and only then was the draft report released.

As for final moves being made toward the start of the plant’s operation, Fuketa said, “Given the amount of equipment and facilities subject to inspections, the key will be how accurately JNFL can technologically manage them,” indicating a long-term response.

JNFL aims to complete the Rokkasho Reprocessing Plant sometime in the first half of FY21 (April to September 2021). Upon finalization of the draft review report, JNFL commented, “This is a great step forward, and we will continue to do our utmost to clear the examination.”