On November 27, the Nuclear Regulation Authority (NRA) of Japan issued a draft review report on its examination of the Onagawa-2 (BWR, 825MW), owned and operated by the Tohoku Electric Power Co., for compatibility with the new regulatory standards. 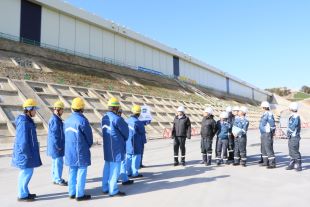 The report will be officially finalized after being referred to the Japan Atomic Energy Commission (JAEC) and the Ministry of Economy, Trade and Industry (METI), and is opened to the public for comments.

An application to the NRA for a compatibility examination of Onagawa-2 was filed in December 2013. Based on geological characteristics, as well as the fact that the Onagawa-2 unit had experienced a major earthquake, the NRA carried out its examination cautiously, especially vis-à-vis the evaluation of geological features, seismic motion and seismic design.

As Japan’s closest nuclear power plant (NPP) to the hypocenter of the giant earthquake that struck eastern Japan in March 2011, Onagawa-2 was struck by a major tsunami 13 meters high. From the construction stage, however, the utility had previously recognized that protection from tsunami was a vitally important issue, so it had already taken multiple emergency measures beforehand, including elevating the site to 14.8 meters above sea level, meaning that the unit managed to avoid a nuclear accident.

To further improve safety, Tohoku Electric is currently working on a seawall some 29 meters above sea level, substantially higher than what is deemed necessary under standard tsunami assessments.

Safety improvement measures at the Onagawa-2—carried out based on the new regulatory standards and latest information—will be completed in FY20 (April 2020 to March 2021). That excludes facilities to respond to specific severe accidents, which include so-called “specific safety facilities” and permanent DC power source facilities.

At a regular press conference in March of this year, the power utility’s president put the costs for the safety measures at Onagawa-2 at approximately JPY 340 billion (USD 3.1 billion at USD1=JPY110).