On July 18, the Meeting of Japan-Taiwan Nuclear Energy Experts—sponsored by the Japan Atomic Industrial Forum (JAIF) and the Chung Hwa Nuclear Society (CHNS)—was held in Tokyo for experts from the two countries to exchange views. 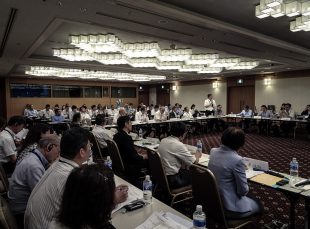 Along with proposals and changes in Taiwanese energy policy, the participants discussed such issues as the decommissioning of nuclear power plants, studies and technological developments in the treatment and disposal of nuclear waste, as well as various related issues. The event site included an area for introducing nuclear-related companies and providing opportunities for business networking.

In his opening address, JAIF Senior Managing Director Katsuya Sato spoke on the meeting’s theme, saying, “Nuclear plant aging and decommissioning have increasingly become major issues: not just in Japan but in its Asian neighbors as well.” He expressed confidence that the meeting—the 30th, including the previous Japan-Taiwan Nuclear Safety Seminar—would make a significant contribution.

On behalf of the Taiwanese delegation, CHNS Chairman Chin Pan said that the revised law included the scheduled decommissioning of six nuclear reactors at three nuclear sites by the year 2025, and that Taiwan’s energy structure in Taiwan would shift to fossil fuels and wind power. As for nuclear power, he said that this meant decommissioning and waste disposal would be “imperative.” He asked Japan for its guidance and the sharing of its technology and experience in decommissioning.

Next, Der-Fwu Lin, chief engineer and company spokesperson for the Taiwan Power Company (TPC), delivered the keynote address, in which he talked about the Chinshan NPPs (2BWRs, 666MWe each), whose two units are to be the first shut down: Unit 1 on December 5, 2018, and Unit 2 on July 15, 2019. He said that TPC had established a task force in August 2016 toward their decommissioning, and has already worked on technological development and the regulatory framework, among other matters.

Low-level radioactive waste from Taiwan’s NPPs is temporarily stored at Lanyu (Orchid) Island off the southeastern coast of Taiwan Island. At present, selection procedures are proceeding at two final-disposal candidate sites. As for spent nuclear fuel, a dry storage installation has been set up at the Chinshan NPPs, and the construction of another installation is underway at the Kuosheng NPPs (2BWRs, 985MWe each).

At the July 18 meeting, general discussions followed presentations by both sides. The Japanese delegation suggested a clearance system wherein waste not requiring special handling as radioactive material would be recycled. In response, the Taiwanese delegation said that it would discuss the system with politicians and residents.