On January 20, a meeting was held in Tokyo of the special committee on the nuclear damage compensation system under the Japan Atomic Energy Commission (JAEC). The members discussed such matters as strict legal liability and the channeling of liability, along with the scope of responsibility and financial security, as parts of an ideal system of nuclear damage compensation. 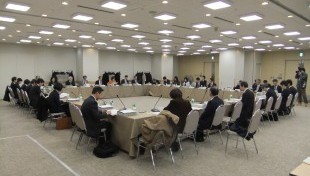 They continued discussions of the previous meeting concerning the division of responsibility between the public and private sectors. Professor Shigeru Takahashi of the Hitotsubashi University Graduate School of Law said that it was unreasonable to incorporate such a division in general laws, as the locus of responsibility depends on the facts and circumstances of each particular incident. He added that it was thus more appropriate for the government to determine the responsibility case by case, and also said that it was important for the system to enable relief to be provided to disaster victims evenly.

Another committee member, Toshihiko Baba of the Central Union of Agricultural Cooperatives, said that the government should come to the forefront and verify a mechanism to respond to victims’ needs promptly, citing the inordinate time taken for people to get compensated after the March 2011 accident at the Fukushima Daiichi Nuclear Power Plants. The reason, he said, was that it is not always clear who is responsible when an accident occurs.

As for strict legal liability and the channeling of liability, committee members mostly thought it appropriate not to apply the Product Liability Law. As for the scope of liability, Executive Director Yuka Matayoshi of Morgan Stanley MUFG Securities Co., Ltd. said that it was important to discuss such issues considering changes stemming from the deregulation of Japan’s retail electricity market, as well as looking at overseas examples. She then cautioned that while everyone was mindful of the importance of responding flexibly, it could also make things less foreseeable for nuclear operators.

Regarding concerns that limited liability may lead to a safety “moral hazard”—referring to people’s tendency to loosen vigilance in such situations—Professor Hiroshi Ohashi of the Graduate School of Economics at the University of Tokyo pointed out that there was already an “institutional brake” in the case of nuclear power: namely, the process involving regulatory standards and approvals from municipalities.