On February 4, the Nuclear Reform Monitoring Committee, an external committee of experts monitoring efforts by the Tokyo Electric Power Co. (TEPCO) toward nuclear safety reform, met to hear a report from the company on the progress of its safety reform efforts and state of improvement in its self-assessments as reviewed at the committee’s previous meeting. 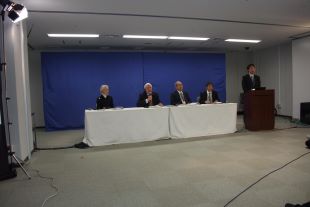 Based on the lessons learned from the March 2011 accident at the Fukushima Daiichi Nuclear Power Plants (NPPs), TEPCO has been carrying out its nuclear safety reform plan centered on improvements to safety consciousness, communication and technological capabilities.

At the previous meeting in January 2019, the committee reviewed TEPCO’s self-assessment in the following key areas, after which it made proposals:

At the February 4 meeting, the committee looked at TEPCO’s efforts based on its prior proposals. It rated the efforts highly, saying that the power utility had performed stricter self-assessments and made major progress in strengthening governance.

On the matter of communication improvement, the committee recognized that TEPCO is striving to move beyond the conveyance of information to a state where the information is reliably, effectively understood and utilized. The committee encouraged the company to continue that effort.

At a press conference after the meeting, former NRC Chairman Klein said that the committee wanted to know whether TEPCO could take notice of and recognize situations itself, without their having to be pointed out by others. He thus emphasized the importance of the company’s evaluating its own organization critically and determining its own weaknesses.

Referring to the sharing of information, he also said that it was important that explanations be such that everyone could understand their significance, beyond, for example, just making a numerical statement of becquerels.

TEPCO presents a progress report on its nuclear safety reform plan every quarter. After an earthquake off Yamagata Prefecture on June 18, 2019, the power utility mistakenly reported abnormalities at its Kashiwazaki-Kariwa NPS to local authorities. In a second quarter report released in November 2019, the company stated that it had implemented countermeasures, including revisions to a fax messaging form, strengths of its shift system, and training. Those changes, it said, were confirmed with the siting municipality.

Former NRC Chairman Klein visited Kashiwazaki-Kariwa last December to see for himself the safety measures that TEPCO has been taking at the site. He gave them high marks as well, saying that they provided “a major safety margin” both in terms of normal operations and in various hypothetical accident scenarios.