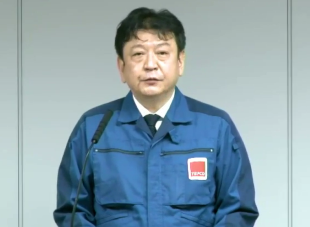 After a moment of silent tribute at 2:46 p.m., the time the earthquake struck a decade ago, Kobayakawa expressed his condolences to the victims, and restated his “heartfelt apology that the accident is still causing great hardships and concerns, not only to the people of Fukushima, but extensively across society.“

He then emphasized the importance of three things:

— Learning from the past and putting its lessons into practice.

— Thinking always from the points of view of society and customers.

— The fact that each employee plays the primary role in continuing to improve safety and quality.

Looking back at the accident, he told the TEPCO employees to reflect on the root causes and causal factors that could have been prevented. He called on them to reflect their understanding in daily operations, through their individual behavior and attitudes.

He referred to what Dr. Hideyo Noguchi, a prominent Japanese bacteriologist from Fukushima Prefecture, said, “ I cannot change the past. The only things I can change in life are myself and the future.” The TEPCO president then asked the employees to “learn from the past, unite your minds, and do your individual best at your workplace for the sake of reconstructing Fukushima and its future.”

Next, Makoto Ookura, head of the Fukushima Reconstruction Headquarters, said that “responsibility for revitalization of Fukushima lies with the company and its management plan.” Retiring at the end of this month, he looked back at activities to support those who had evacuated after the accident, and highlighted the severe consequences of losing confidence.

Ookura said that while we don’t know when, a day would come in the future when people would say, “TEPCO faces its responsibility squarely.” He continued by saying, “That means we must be sure to reflect on the lessons of March 11, and turn them into new strength.” He told the employees that their work now was for that.

Referring to TEPCO’s activities, Chairman Kazuhiro Ikebe of the Federation of Electric Power Companies of Japan (FEPC), in a comment released on March 11, said, “FEPC continues to fully support its activities, including decommissioning with priority on ensuring safety, revitalizing living environments, and creating industrial foundations and employment opportunities.” 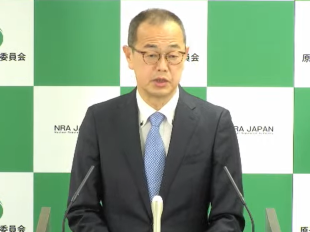 At the Nuclear Regulation Authority (NRA), Chairman Toyoshi Fuketa marked the tenth year since the accident by also releasing a comment, saying, “We cannot forget our original resolve,” referring to creation of the NRA.

He cautioned against a return to “regulatory capture,” a time when regulators—tasked with regulating the industry—remained mindful of operator benefits. Separating nuclear promotion and regulation had been part of the debate over the nuclear administrative system, and the phrase appears in the report of the National Diet of Japan Fukushima Nuclear Accident Independent Investigation Commission (NAIIC).

Fuketa also stressed the importance of a questioning attitude. Though Japan’s new regulatory standards are often described as offering the world’s highest levels of safety, they, too, can be continually improved. “The NRA must be fully conscious of the danger of creating a new ‘safety myth’ around nuclear power plants,” he said.

He expressed concern that development of examination and inspection guidelines, currently being undertaken, could result in a “stoppage of thinking,” and sounded the following alarm to the Secretariat of the Nuclear Regulation Authority (NRA) and nuclear operators: “The challenge in pursuing safety is to reduce the unexpected. Thinking anew is always essential. Sometimes one has to scrap old thoughts and ways of doing things and start over.”